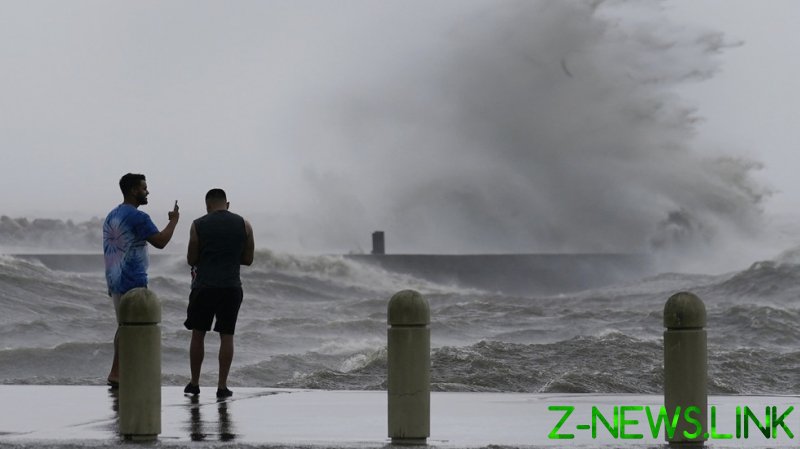 Ida landed on the Gulf Coast on Sunday at around midday, first hitting Louisiana’s southernmost point of Port Fourchon. The National Hurricane Center reported sustained winds of 150mph (240km/h), and cameras set up on nearby Grand Isle captured the torrential storm surge that followed.

The storm surge in some coastal areas is expected to be as high as 16 feet (4.8 meters), and storm warnings are in effect from Mississippi to Alabama’s eastern border with Florida.

Residents of Port Fourchon and other low-lying coastal areas had been advised to evacuate several days ago. Residents of New Orleans, around 50 miles (80km) north of Ida’s landfall, were also urged to flee, and highways out of the city were clogged with traffic late on Saturday and into Sunday morning. Those who didn’t make it out by Sunday were urged to stay indoors and prepare to shelter in place for 24 hours.

As the storm closed in on the Big Easy, videos showed lashing rain, flooded streets, and uprooted trees.

Under steel-gray skies, the normally bustling and tourist-packed streets of the French Quarter were deserted, save for the occasional brave wanderer and one jazz musician seemingly determined to keep the music going until the last possible moment.

By early afternoon, areas outside the protection of the city’s levees were already underwater. Power outages were reported, and sewage pumping stations began to fail. Aside from these pumps, nearly 100 water pumps keep floodwater outside the city. These will be crucial in averting catastrophic damage, and according to the Weather Channel, most were functioning ahead of Ida’s landfall, with 96 out of 99 pumps online on Saturday.

Louisiana Governor John Bel Edwards said Ida could be the state’s worst direct hit by a storm since the 1850s. However, the governor told CBS News on Sunday that the city’s levees should hold against the storm, after they were upgraded in the wake of Hurricane Katrina, which laid waste to much of New Orleans on the same day 16 years earlier.

Looting and lawlessness plagued New Orleans in the aftermath of Katrina, and NOPD Police Chief Shaun Ferguson told reporters on Sunday that similar scenes would not be tolerated this time around. “We will not allow any looting during this process, and we will be out there to enforce that,” he stated.