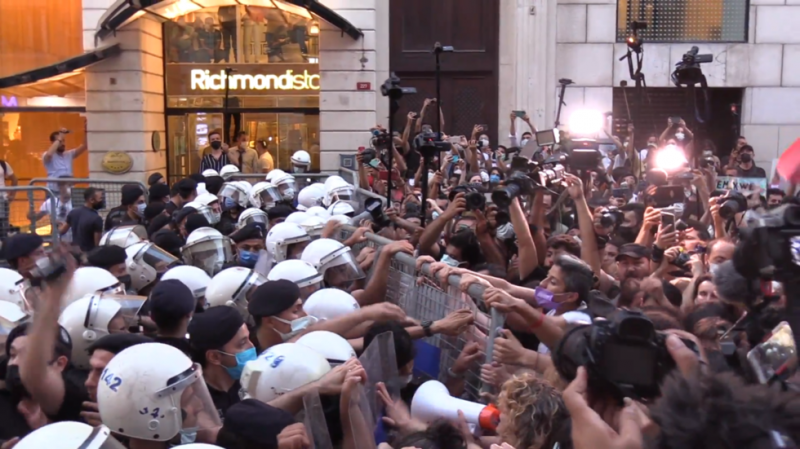 Crowds of hundreds, mainly women, marched in central Istanbul on Thursday. Activists and members of various NGOs, as well as representatives of the LGBTQ+ and feminist communities were seen chanting, drumming, and carrying banners opposing Ankara’s withdrawal from the international treaty.

Protesters carried banners reading: “We will not be silenced, we will not fear, we will not bow down” and “We are not giving up on the Istanbul Convention,” and law enforcement intervened with a heavy-handed response. Officers in riot gear tried to clear the streets and set up barriers, while demonstrators attempted to break through them, footage from RT’s video agency Ruptly shows.

“I am a woman and I want to live freely in this country, without being subjected to violence,” one protester told Ruptly, adding that activists “will not give up our struggle” against the withdrawal from the treaty.

“We fight for ourselves, react and do not remain silent. This cruelty will not end if we remain silent,” another protester said. There were smaller protests seen in other Turkish cities, including Izmir.

Erdogan signed an executive order withdrawing Turkey from the convention in March, but the protests fired up after the country’s official exit this week. The Turkish president has publicly defended Ankara’s decision to terminate its decade-long inclusion in the international human rights treaty, which was negotiated in Istanbul in 2011. He argued that women in Turkey are protected by domestic laws rather than the EU-initiated treaty, saying the exit “will not lead to any legal or practical shortcoming in the prevention of violence against women.” He claimed the treaty had been “hijacked” by the LGBTQ+ community.

“Our battle did not start with the Istanbul Convention and it will not end with our withdrawal from the treaty,” he said.

The agreement is aimed at combatting abuse against women through a legal framework, as well as promoting gender equality. Out of 47 member states, the convention has been ratified by 34 countries, according to Amnesty International, with Turkey becoming the first to withdraw.

Turkish women’s rights groups, as well as international human rights organizations and several Western states, have criticized the “terrifying precedent.” It “will put millions of women and girls at greater risk of violence,” Amnesty said, noting that “domestic violence is prevalent [in the country] and at least 300 women were murdered last year alone.”