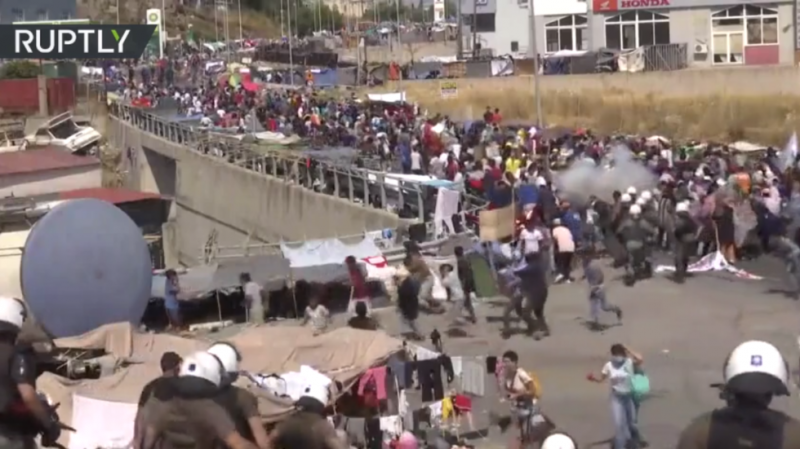 The blaze at the severely overcrowded camp, which was initially designed to accommodate about 2,200, left more than 12,000 people, mainly Africans and Afghans, without shelter. Greek authorities have already started erecting a new tent settlement for them, but the migrants are demanding to be allowed to leave the island.

Hundreds of people marched across Lesbos on Saturday, chanting “Freedom” and “No camp.” Some of them carried signs which read, “We don’t want to go to a hell like Moria again” and “Can you hear us Mrs Merkel?,” appealing to the German chancellor to take them in.

Things got heated after the protesters tried to make their way down a road leading to the island’s port of Mytilene, which was blocked by the police. There were brief clashes, with law enforcement deploying teargas to make the migrants disperse.

A video by RT’s Ruptly video agency shows a teargas canister exploding in the middle of the crowd, and protesters fleeing.

Greek officials said that several fires at the camp were started deliberately by the migrants on Tuesday and Wednesday as they were angry about being forced to quarantine after at least 35 Moria residents tested positive for Covid-19.

Migrants had been amassing on Lesbos since 2015, when the European refugee crisis began. They were stuck on the island as, according to European Union rules, they could only leave if they were granted refugee status, a long bureaucratic process, or deported to Turkey, where they had come from before arriving in Greece.

Following the blaze, the Greek authorities said that only 406 unaccompanied children and teenagers would be taken off the island, while the rest of the camp’s residents are to remain in Lesbos.

French President Emmanuel Macron said that France and Germany were trying to work out a solution to accommodate migrants from Moria, expressing hope that it would “include as many European countries as possible.”

The Prime Minister of the German state of North Rhine-Westphalia, Armin Laschet, already said that he was willing to “take in 1,000 refugees” as part of that plan.