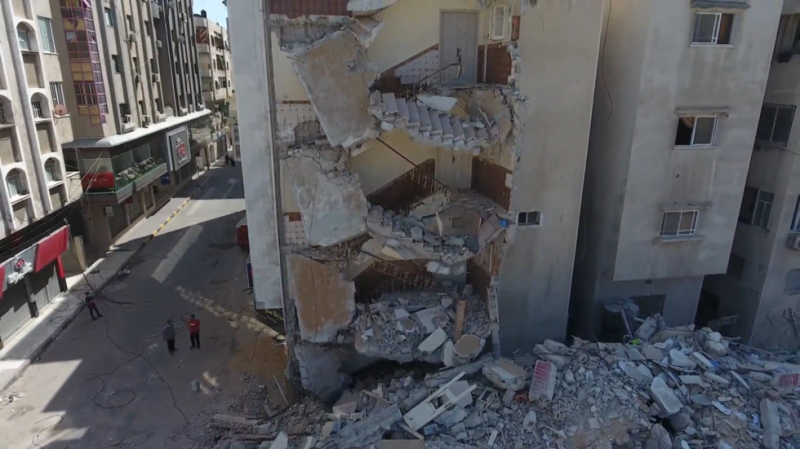 Drone footage taken by RT’s video agency Ruptly in Gaza on Friday shows local residents navigating past a number of destroyed and damaged buildings. One high-rise is shown completely imploded; all that remains are several fragments of the stairwell, hanging off the neighboring building.

Two other multistory buildings can be seen on the ground sideways, with some of the stairwell windows still intact on one of them.

During the 11-day battle, Hamas and PIJ fired over 4,000 missiles at Israel, which responded by bombarding the Palestinian enclave with drones, jets, artillery and tanks. Several prominent residential towers were targeted for destruction – on grounds that they allegedly housed Hamas headquarters – including one where the Associated Press had rented offices.

The Palestinian militant groups began launching rockets on May 10, after clashes between Israeli police and Palestinian demonstrators outside Al-Aqsa mosque on Jerusalem’s Temple Mount. The trigger for the dispute was a court order evicting several Palestinian families from Jerusalem’s Sheikh Jarrah neighborhood.

It was the deadliest escalation of violence since 2014, with over 230 people killed in Gaza and 12 in Israel before a ceasefire mediated by Egypt went into effect in the early hours of Friday.