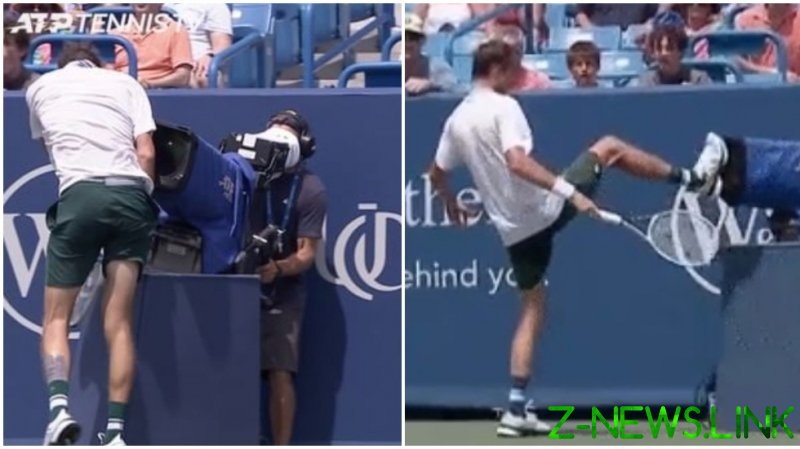 With the US Open set to start in nine days, the warm-up tournament is in its business end.

After world number two Medvedev clinched the first set 6-2, the second was tied 1-1 when he attempted to return a shot from his rival yet went crashing into a camera which he knocked down.

Then trying to get it moved, he was heard saying, “I almost broke my hand” several times before asking the umpire: “You don’t care about players?”

“I’m gonna sue them,” he threatened, and Medvedev then gave the offending item the kind of front kick that a UFC champion would be proud of.

Rather than be criticized for his actions, however, the 25-year-old was supported by fans.

“They should remove them. Ridiculous. Put them up in the stands,” said one.

“Absolutely mad to put a camera on the court!” balked another.

Recent mixed doubles Olympic gold medalist Rublev also had his moment of madness when embarking on a furious outburst.

Smacking his towel and kit in disgust, he was captured pouring water over his head to try and cool down.

“This cat is angry and panting,” remarked one tennis account.

But Rublev did rally back to capture the second and third sets 6-3, which booked him a place in the final against either Alexander Zverev or Stefanos Tsitsipas.