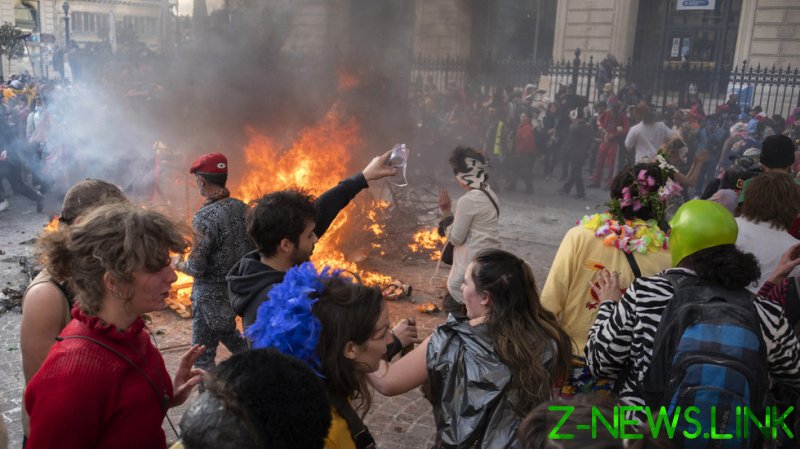 A huge crowd of people, most of them young and without masks, paraded through the southern port city as they played music and danced. According to police estimates, the celebration attracted as many as 6,500 participants.

Costumed revelers also marched around a large bonfire in the street as they sang songs.

The event is held annually but was canceled last year due to the coronavirus outbreak. While Marseille was not affected by France’s new lockdowns in several areas of the country, the carnival’s participants appeared to show little interest in adhering to social distancing guidelines. Local authorities claim that they were not given prior notice that the event would be held, and sent in police to disperse the partygoers.

Law enforcement personnel in riot gear reportedly deployed tear gas as they cleared out the area. In one video shared on social media, cops with shields and batons are seen rushing towards several costumed merrymakers, who put their hands up as they back away. Large crowds were seen fleeing as the police operation was underway. Police vans, sirens blaring, were filmed patrolling the city’s streets for any stragglers.

It’s unclear if there were any arrests, but numerous people were given €135 ($160) fines for forgoing a face mask.

In a tweet, regional police condemned the “irresponsible” revelers for gathering without masks “in the midst of a health crisis.”

Several areas of France, including the capital, Paris, were recently placed under four-week lockdown amid a third wave of Covid-19 infections.

Anti-lockdown protests were held over the weekend in cities around the world, with some rallies resulting in scuffles and arrests. On Sunday, police clashed with hundreds of demonstrators in Bristol who were protesting against a bill that would dramatically increase police powers in the UK.