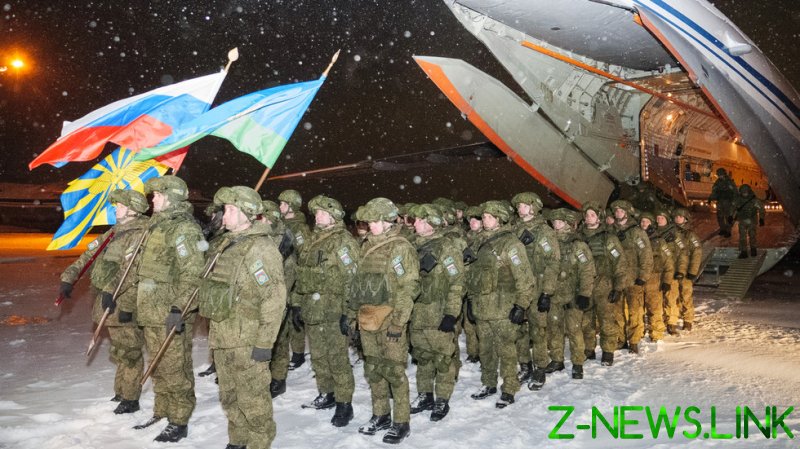 The first Russian units that were deployed to Kazakhstan as part of a peacekeeping mission by the Collective Security Treaty Organization (CSTO) have returned home, touching down at a military airfield outside Moscow.

Four military transport aircraft landed at the Ivanovo North air base to the north-east of Moscow late on Thursday.

“The first Russian paratrooper units – part of the Collective Peacekeeping Forces of the CSTO – who were tasked with protecting socially important objects in Kazakhstan returned to the base of their permanent deployment on four Il-76MD aircraft from the city of Almaty,” the Russian military said in a statement.

The Russian military aircraft braved strong winds and low visibility around the airfield to bring back the troops. After soldiers disembarked the planes, they were treated to a ceremonial welcome before heading for their bases.

The peacekeeping mission was launched by the Russia-led CSTO last week, after Kazakh President Kassym-Jomart Tokayev requested assistance from the six-member military bloc. The country endured a wave of unrest, triggered by a sharp hike in fuel prices at the start of the new year. The initially peaceful fuel protests spiralled into violence shortly after, and saw attacks on government buildings as well as widespread looting and rioting. Kazakhstan’s largest city, Almaty, bore the brunt of the turmoil.

Several thousand troops, mostly Russian, were sent into the country to guard strategic facilities. The mission was declared a success, with the troops beginning their withdrawal on Thursday. It is expected that the remainder of the CSTO troops would pull out sometime in the next two weeks.