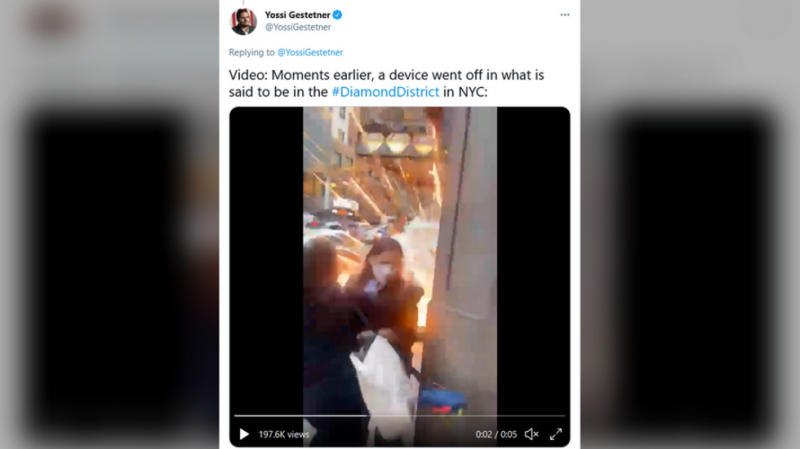 As fighting between Israel and Hamas-controlled Gaza lulled after 11 days of rocket strikes and IDF bombardment, there was no sign of calm in New York, where pro-Palestine demonstrations faced off with supporters of the Jewish state in Manhattan.

Footage shared on social media shows what appears to be a firecracker going off in New York’s Diamond District. Former NY State Assemblyman and Jewish leader Dov Hikind claimed that “a mini firebomb” was thrown by Palestinian protesters at a group of Jews. Video of the explosion shows people screaming and fleeing in disarray after the blast.

Another clip shows debris lying on the ground and smoke rising from the scene.

Police could be seen making arrests at the site of the incident, though it remains unclear whether the alleged bomb-thrower was taken into custody.

Other footage shows shouting matches and scuffles erupting between the rival groups amid a heavy police presence in the area.

The skirmishes between proponents of Free Palestine movement and supporters of the Israeli bombing campaign in Gaza have spilled onto the streets of several US cities, including New York and Los Angeles, where local police are investigating a possible hate crime against Jews after pro-Palestine activists were filmed attacking a Jewish man outside a restaurant. A group of men allegedly shouted pro-Palestinian slogans and anti-Semitic remarks at diners, prompting one of them to fire back, which led to the confronation.

Multple arrests were reported after pro-Israeli and pro-Palestinian protesters squared off with each other and police ouside Tel Aviv’s consulate in New York City on Tuesday during a demonstration against the Gaza strikes.