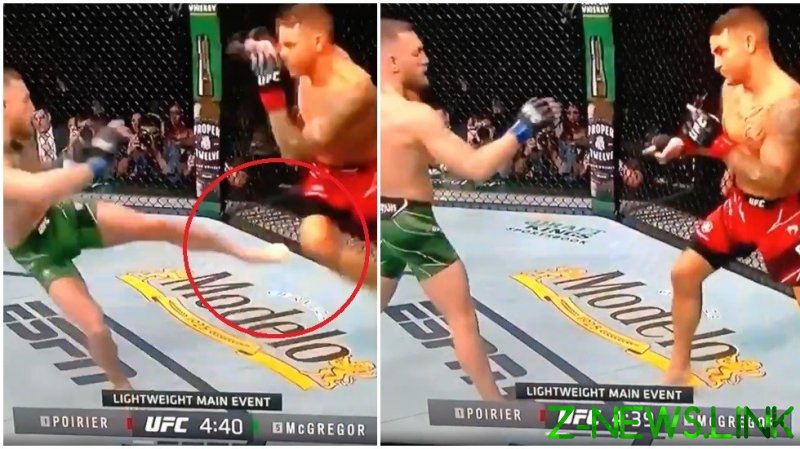 McGregor’s night ended in excruciating circumstances in Las Vegas as his lower left leg buckled underneath him as he stepped backwards after throwing a punch at Poirier towards the end of the first round.

The Irishman was unable to continue as Poirier was declared the winner via doctor’s stoppage TKO, with UFC boss Dana White later saying McGregor would undergo surgery for a fracture to the lower tibia in his left shin.

McGregor had started the bout quickly, firing off a flurry of kicks as he attacked Poirier’s body and legs – partially utilizing a strategy that Poirier had used in his victory over the Irishman back in January.

That included one shot from McGregor just 20 seconds into the fight which Poirier checked by raising his right leg and then sweeping it out of the way.

Poirier then briefly pointed knowingly at his rival, suggesting that it could be a significant moment.

“This is when Dustin Poirier thinks Conor McGregor actually fractured his ankle/lower leg… see the check and then quick point by Dustin,” wrote on fan, sharing the moment on social media.

Indeed, Poirier asserted after the fight that the early exchanges had paved the way for what followed.

“He fractured [his leg] in one of the checks at the beginning of the fight,” Poirier explained.

“Then it broke on a punch for sure. When I pointed at him at the beginning of the fight, that’s when I checked a good kick. I bet that’s when it cracked. I felt something.”

An engrossing fight had continued with Poirier escaping a guillotine attempt by McGregor before hammering away with punches and elbows on the ground.

When McGregor scrambled back to his feet, his effort to land shots came to a painful end when his ankle gave way.

Still sitting on the octagon floor as he gave his post-fight interview, a defiant McGregor was typically dismissive of the theory that Poirier had done early damage to his leg by checking his kicks.

“There was no check,” McGregor fumed to UFC pundit Joe Rogan.

McGregor vowed that his rivalry with Poirier was “not over” despite the American winning their last two meetings to move 2-1 ahead on the scoreboard.

UFC boss Dana White suggested that Poirier would next meet lightweight champion Charles Oliveira in the Brazilian’s first defense of his title but added that McGregor and Poirier would potentially meet again further down the line.

Poirier, 32, also appeared open to the idea following some toxic trash talk from McGregor which dragged in the American star’s wife and also included threats that he would “murder” Poirier in the octagon.

“We are going to fight again whether it’s in the octagon or on the sidewalk,” said Poirier, who has now lost just one of his last 10 fights.