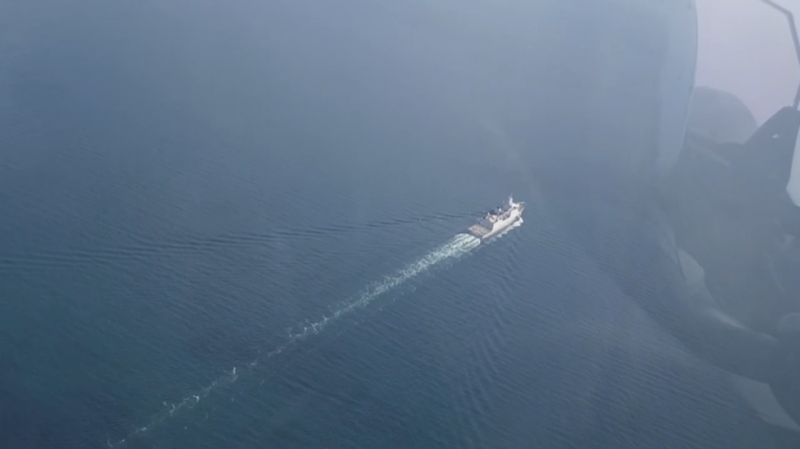 The frigate Evertsen was on course to violate the Russian border in the Black Sea, but was prevented from doing so by Russian jets flying at a safe distance from the vessel, Moscow claimed, in response to Amsterdam’s complaints.

The incident occurred on June 24, just a day after the British Royal Navy destroyer HMS Defender violated Russian territorial waters off Crimea’s Cape Fiolent and was warned off by jets and a coast guard vessel.

While sailing in neutral waters, the HNLMS Evertsen “changed its course and began to move in the direction of the Kerch Strait,” Moscow’s Ministry of Defense said on Tuesday. Su-30 fighters and Su-24 bombers were dispatched “to prevent (the) violation” of Russian territorial waters. They flew “at a safe distance” near the Dutch ship, which “immediately” changed its course to the previous route, at which point the interceptors returned to base.

“The flights of Russian aircraft were carried out in accordance with international rules for the use of airspace,” the MOD said.

Moscow only commented on the incident after the Dutch Ministry of Defence complained of “unsafe” conduct by the Russian interceptors. In a statement on Tuesday morning, the Dutch said Russian jets had “harassed” the ship in international waters for five hours, flying “dangerously low and close” and “performing mock attacks.”

After “hours of intimidation,” the Evertsen had its electronic equipment disrupted as well, the Dutch government claimed.

The Dutch MOD said the Evertsen is part of the same NATO strike group as the Defender, currently conducting drills in the Black Sea “with allies from the region.” On June 23, the day before the Evertsen was intercepted, the British destroyer deliberately crossed into Russian territorial waters. The Russian coast guard responded by firing warning shots, while the same type of patrol aircraft dropped bombs along its course.

London initially said the ship was conducting “innocent passage” and denied any warning shots or bombs were fired, until the Russian MOD published video of the incident that proved otherwise.