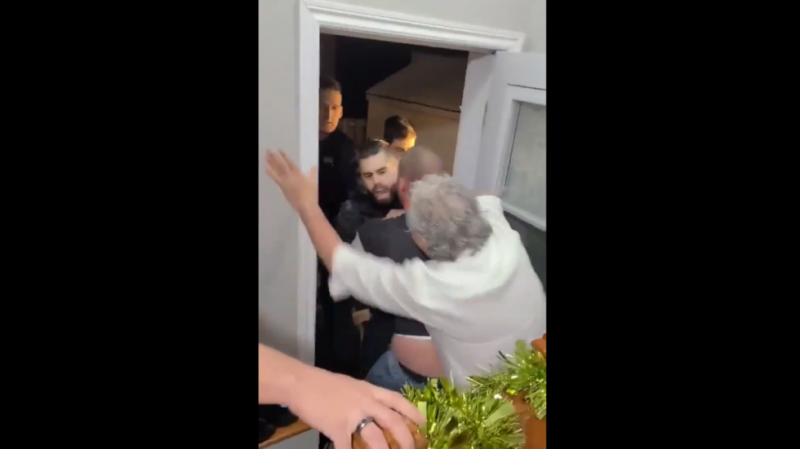 The incident reportedly occurred at a home in Gatineau, just across the Ottawa River from Canada’s capital city, on Thursday. The New Year’s Eve gathering of six people included individuals from outside the home, making it a violation of Quebec’s ban on such get-togethers.

The video, which was circulating on Saturday, begins with police pulling a man out of the doorway of the house as an elderly person and a woman try to hold him inside the dwelling from behind. The man is wrestled to the ground by multiple officers outside, where he’s pinned face down in the snow and handcuffed. A woman also can be seen outside, handcuffed and restrained from behind by officers.

Police told the French-language Journal de Montreal that they were acting on a “citizen’s complaint,” when they faced off with the occupants of the home after they refused to receive a notice and voluntarily end their gathering. Six officers were involved in the fracas. Fines for violating the gathering ban are $1,546 per person.

Quebec Premier Francois Legault previously had said people would be allowed to gather in groups of as many as 10 from December 24-27 if they self-quarantined for one week before and after their meetings. But on December 3, he banned gatherings altogether in most of the province because of rising Covid-19 infections. One exception he allowed was for people living alone to have one visitor, as long as masks are worn and the individuals stay at a safe distance from each other.

Rebel News founder Ezra Levant was among those outraged by the video, saying police went in “Gestapo-style, assaulting citizens.”

Journalist Cassandra Fairbanks, who has been an outspoken critic of sweeping lockdowns due to the pandemic, urged residents  “to fight” for their rights, calling the fact that people might endorse such police raids “scary.”

Another observer opined that the snitch was driven by jealousy. “Tale as old as time: miserable people ratting on happy people, aka misery loves company.”

Ironically, Gatineau police joined in the conversation only when a Twitter commenter pointed out that an officer involved in the arrest wasn’t wearing a mask. “First two officers were wearing their masks, speaking outside with the owner,” police tweeted. “Some people became aggressive. One male hit an officer multiple times in the face. The officers who were not wearing masks were called as backup and, due to the emergency, didn’t have time to put it on.”