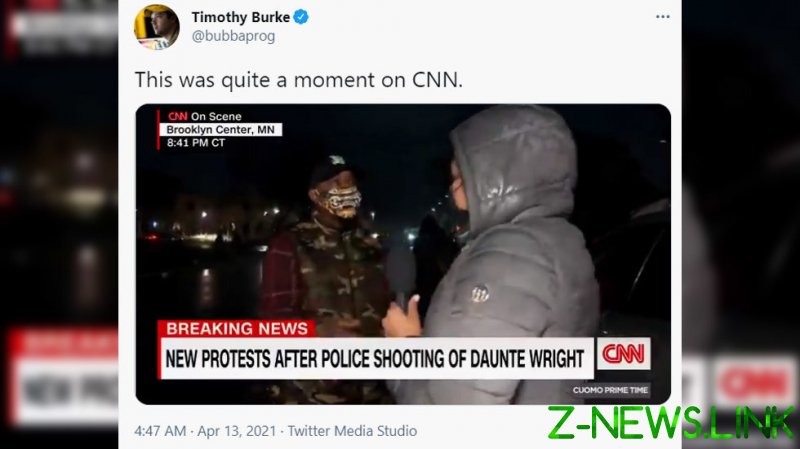 The on-air exchange between CNN’s Sara Sidner and the man, who refused to identify himself, happened on Monday evening. Sidner was reporting from the scene of intense clashes involving people protesting the death of 20-year-old black man Daunte Wright, who was killed by a police officer on Sunday.

The man interrupted Sidner with a few expletive-laden remarks, accusing the media of “twisting up the story” and aggravating the protests. She suggested he give his point of view of what was going on, saying they were broadcasting live, but he either didn’t seem to believe her or didn’t care.

“I get that people are mad. It’s normal. I take no offense,” the journalist later said about the episode on her Twitter account.

The two talked against a backdrop of fireworks exploding several hundred meters away, where protests over Wright’s death were happening for the second night running. He was stopped over an expired license plate and tried to drive away after the cops found there was an outstanding arrest warrant in his name. At that point, one of the officers shot him.

The public discontent intensified on Monday, when the police suggested that the man was killed due to an “accidental discharge” by the officer, who supposedly pulled out her firearm instead of a Taser during the confrontation.

The disturbance happened in the suburbs of Minneapolis during the trial of former police officer Derek Chauvin, who stands accused of unlawfully killing black man George Floyd last year. Floyd’s death unleashed the biggest wave of mass protests against racism and police brutality the US has seen in decades.