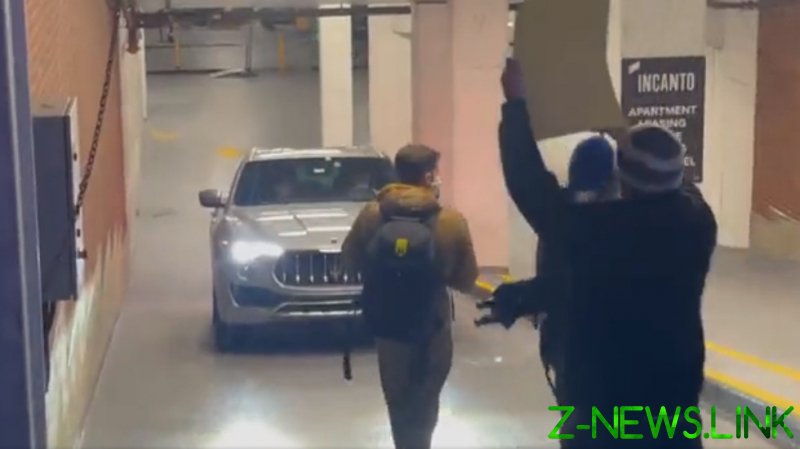 The group of “young climate activists” accosted Manchin (D-West Virginia) as he made his way from his houseboat yacht to his Maserati SUV on Thursday morning, shouting slogans at the senator before barring the way of his vehicle, according to John Mejia, national spokesman for the Sunrise Movement, a climate group.

“After [Manchin] walked away without giving any answers to the… activists who confronted him for obstructing [President Joe Biden’s] climate and jobs package, they blocked his exit from the parking lot demanding answers,” Mejia tweeted alongside a video, while other footage posted by activists stated “We blockaded Joe Manchin’s car and he tried to run us over.”

Though it’s unclear who is driving, the expensive SUV said to belong to Manchin was seen slightly pressing into the group of protesters with its horn blaring as they attempted to block its way out of a parking garage. Nobody appeared to be injured in the footage, however.

Both Manchin and his colleague Kyrsten Sinema (D-Arizona), have taken flack from fellow Democrats, as well as critics further to the left, for standing in the way of Biden’s so-called ‘Build Back Better’ spending plan, a sweeping $1.75 trillion bill which seeks to put funds into halting climate change, among a litany of other things. The senator has taken issue with paid leave measures in the legislation, which have become a hot topic for fellow party members in recent weeks. Though Democrats previously stripped the provision from the House version of the bill entirely, House Speaker Nancy Pelosi re-introduced it earlier this week, despite Manchin’s objections. With Republicans in unanimous opposition to the paid leave plan, the few Democrats still skeptical could play a large role in the fate of the high-dollar spending package in the upper chamber.