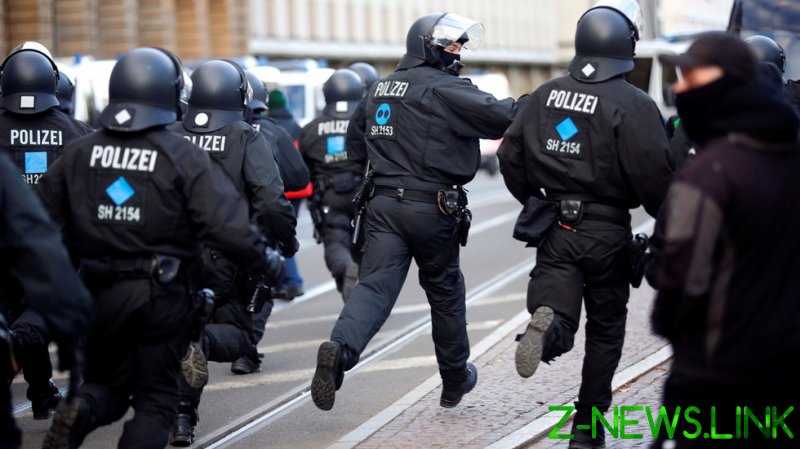 Leipzig has been one of the centers of the anti-lockdown movement in Germany in recent weeks. On November 8, the ‘Lateral Thinking’ group, which insists that Covid-19 is a hoax, was able to gather thousands of people in the city center. A large rally was also expected on Saturday after the Bundestag supported legislation mid-week giving the government more legal basis to impose coronavirus restrictions.

When the Covid-19 skeptics started gathering at the Kurt-Masur-Platz midday, the venue was already occupied by dozens of counter-protesters, who all wore face masks and tried their best to follow social distancing rules.

Then it was suddenly announced that the anti-lockdown rally wouldn’t be taking place at all. The organizers said that they couldn’t agree to the mask-wearing terms with the authorities and asked several hundred of their supporters, who were already in the square, to go home.

Leipzig Mayor Burkhard Jung has applauded the cancellation of the rally on Twitter, calling it a victory on the part of the counter-protesters.

The news that the event was called off caused confusion among some coronavirus skeptics who had already arrived. However, they eventually separated into smaller groups and tried staging mini-marches across the city.

They were met by the counter-protesters. The rivaling groups brawled with each other, while also attacking officers. The police said that clashes broke out in several areas in the city.

Several arrests were made, with videos from the scene showing people being taken away by police.

Germany went into a new partial lockdown in early November, ordering restaurants, bars, cinemas to close down and restricting gatherings to no more than 10 people. But Chancellor Angela Merkel insists that more curbs are needed to stem the second wave of the pandemic.

The country has so far recorded more than 914,000 confirmed cases of Covid-19, with almost 14,000 leading to fatalities.