WATCH: Church goes up in flames & COLLAPSES as Chile anniversary rallies escalate into clashes and looting 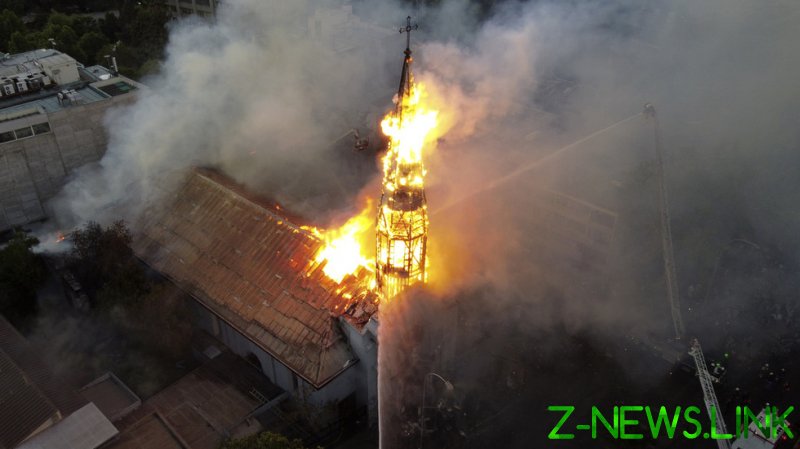 The protest in the capital of Chile erupted in scuffles with police and looting of supermarkets on Sunday evening.

Masked mobs firebombed a police headquarters and church later in the day. While firefighters and even some of the protesters tried to save the Iglesia de la Asunción, its spire eventually collapsed.

“Those who carry out these acts of violence do not want Chileans to solve our problems through democratic means,” Interior Minister Victor Perez said late Sunday, praising peaceful protesters but vowing to bring rioters and vandals to justice.

Perez urged Chileans to express their grievances at a national referendum on October 25 instead, which will ask voters whether Chilean constitution should be replaced and, if so, how a new charter should be drafted.

The current constitution, in force since 1980 and enacted by the former military junta of Augusto Pinochet, has been changed numerous times in the years since. However, it does not establish the state’s responsibility to provide education and healthcare – two demands made by the millions of Chileans who have once again taken to the streets recently following months of Covid-19 lockdowns.

Authorities estimated that Sunday’s rally in the capital Santiago attracted no more than 25,000 people at its peak, much smaller than the 2019 unrest which resulted in curfews and the military patrolling streets for the first time since the rule of Pinochet.