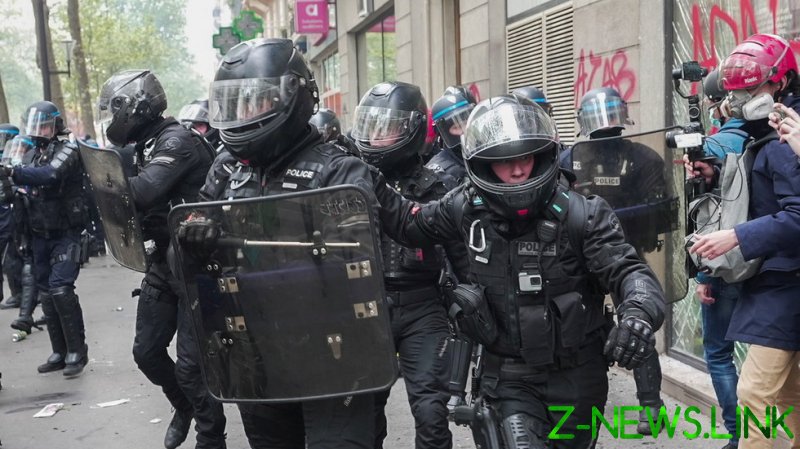 May Day protesters took over the streets of multiple French cities, with the worst of the early clashes happening in the city of Lyon. By mid-afternoon, however, Paris was the epicenter of unrest, as ‘black bloc’ anarchists marching alongside the traditional trade unionists and workers’ groups started smashing banks and shops in the capital.

Heavily armored riot police were nearby and responded with force. Video footage shows a squad of cops charging with shields raised to drive a crowd of vandals away from a bank.

Protesters were seen shooting fireworks at the police, and pelting officers with bottles and stones. The same officers who dispersed the crowd from in front of the bank were temporarily driven back, and another group of cops were seen huddled together under a barrage of projectiles.

Tear gas was used, but many rioters came wearing respirators and face masks. Protesters who came too close to police lines were treated to a hail of batons and pepper spray. Multiple videos show repeated and apparently indiscriminate police charges.

Police dispersed protesters from the Place de la Nation with water cannon. The powerful jets of water blew branches off trees and kept the crowd away from police lines.

May Day, or International Workers’ Day, is traditionally a day of protest in France and throughout Europe. Some demonstrators in Paris protested their wages and working conditions, while others marched against new security bills that would dramatically extend the police’s surveillance powers and criminalize the sharing of pictures of officers. Still more protested the government’s perceived inaction against climate change and its response to Covid-19.

With the demonstrations still ongoing, Interior Minister Gerald Darmanin announced that 34 people had been arrested in Paris by mid-afternoon.