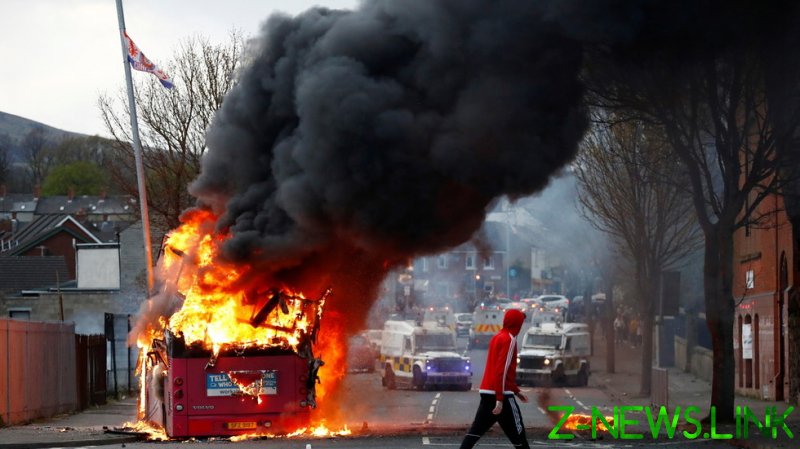 Dramatic footage shared on social media showed people hurling Molotov cocktails at the bus while the driver was still inside as it drove down the Shankill Road. Some in the crowd reportedly tried to hijack the vehicle.

The incident was confirmed by the Police Service of Northern Ireland, which said in a statement that the public should avoid Lanark Way and the Shankill Road, as well as around the Springfield Road and West Circular Road area, where crowds had also gathered.

Northern Ireland’s First Minister Arlene Foster condemned the incident in a tweet, saying: “This is not protest. This is vandalism and attempted murder.”

Deputy First Minister Michelle O’Neill issued a statement condemning the “disgraceful scenes of criminality” and said “protests should be called off.” She said the attack on the bus driver was “potentially lethal” and also decried an assault reported by local journalist Kevin Scott, who said he had been jumped by two people before they pulled him to the ground and smashed his camera.

Police said stones had also been thrown and bins set on fire at the interface gates at Lanark Way, which partition the predominantly Protestant and Catholic communities from one another.

There were further riots in the unionist town of Carrickfergus, near Belfast, on Monday night, as tensions boiled over in Northern Ireland following the decision not to prosecute politicians from the republican Sinn Fein party who attended the funeral of a Provisional Irish Republican Army volunteer despite Covid restrictions. Tensions had already been inflamed among the loyalist community over a key element of the UK’s Brexit deal with the EU.

The anger centres on the ‘protocol’ governing Northern Ireland, which unlike the rest of the UK is effectively still in the EU’s single market, but outside the trading bloc. The protocol was agreed by the UK and EU as part of the Withdrawal Agreement as a means of avoiding a hard border between Northern Ireland and the Republic of Ireland, which is an EU member state, and to continue upholding the Good Friday peace agreement.

Goods entering Northern Ireland from Britain are therefore subject to stringent border checks, which has led to shortages of some products in Northern Irish supermarkets.

Loyalists see the arrangement as a de facto border being placed in the Irish Sea between Northern Ireland and the rest of the UK.