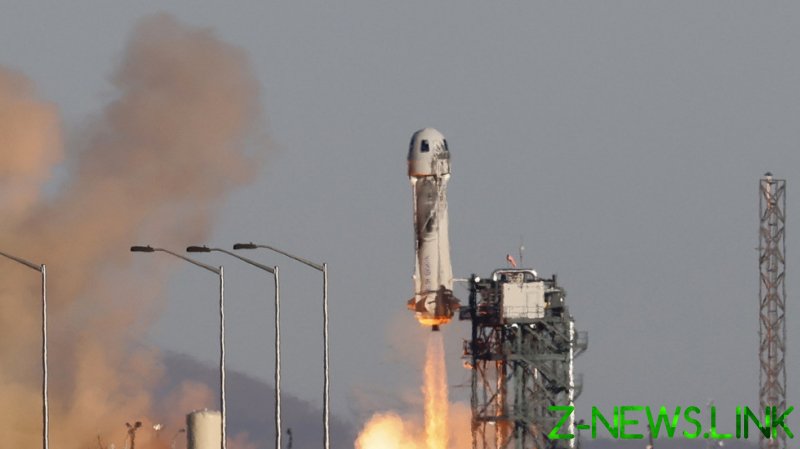 The Jeff Bezos-founded venture’s ‘New Shepard’ spacecraft – named after the first American astronaut to reach space – lifted off from the company’s launch site in Texas.

The crew capsule reached an altitude of about 350,000 feet (106 km) before a parachute-assisted descent and landing on the desert floor. The internationally recognized boundary of space is known as the Karman Line, which is roughly 100 km above Earth.

The entire journey lasted just over 10 minutes, with the crew experiencing a few weightless minutes at the top of their flight path.

Accompanying the Blue Origin recovery team, Bezos himself opened the capsule door to cheers from the crew, which included four paying customers besides “honorary guests” Laura Shepard Churchley and ‘Good Morning America’ host Strahan. This was the first time the company transported a six-member crew after ferrying four people during its two previous launches.

Bezos also pinned commercial astronaut wings to the crew’s blue flight suits. They are likely the last people to receive the badges. The Federal Aviation Administration (FAA) has traditionally given the small pins to people who travel more than 50 miles (80 km) above the Earth’s surface but will end this practice at the end of the year on account of commercial space tourism.

Speaking with Amazon founder Bezos, Churchley recounted being struck by seeing the blackness of space from inside the capsule. The crew’s voices were heard in audio transmissions from the capsule which played as the vehicle approached the end of its flight.

Meanwhile, Strahan, a former NFL standout, jokingly referenced NBA star Kyrie Irving in response to a question about whether the Earth was round. Irving once proclaimed his belief that it was flat. Strahan also wanted to do the flight again, but Bezos joked he would have to cough up some cash for the next one. Blue Origin has not disclosed how much its paying guests forked out for their seats.