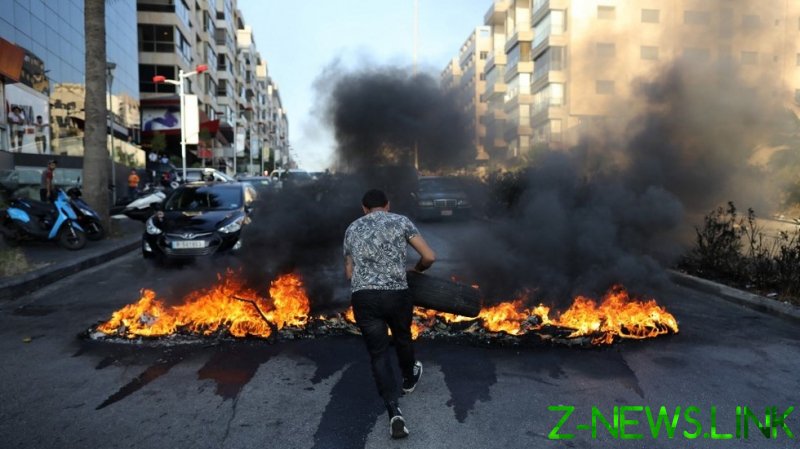 Banners displaying messages claiming the bank had stolen people’s money could also be seen hung over the entrance as a crowd protested outside.

Videos published by local media appeared to show demonstrators roaming around the bank and entering different rooms of the building.

Local media reports suggested that a fire had also broken out inside the bank.

Police were called to the scene to remove protesters from the building and unblock the surrounding roads.

In a statement, the bank claimed three of its employees had been injured in the chaos, including one who was hospitalized with two facial fractures requiring surgery.

“About a hundred men belonging to the Banin Charity Association occupied the building of the general administration of our bank, assaulting our employees,” the bank’s statement read.

It alleged managers at the branch had been threatened with violence unless they transferred funds abroad.

In a Facebook post, the Banin Charity Association said it had recovered some $180,000, which it claimed the bank had “looted” from poor people.

As a result of the bank’s siege on Monday, the Association of Banks in Lebanon said in a statement that other financial institutions will remain closed on Tuesday in an act of solidarity with the besieged branch.

Unrest and protests in Lebanon have become more commonplace as the country has slid further into an economic crisis, worsened by alleged government corruption, the pandemic, political chaos, and the devastating explosion in the Port of Beirut last August.

More protests were held at the weekend in response to the government’s decision to further cut the value of the Lebanese pound against the dollar.

The move came as the country is also dealing with significant shortages of food and medicine.