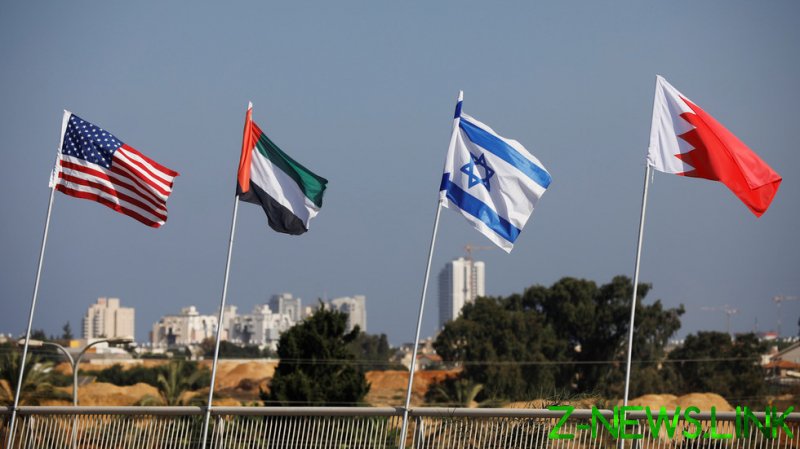 Tuesday’s ceremony on the South Lawn is the first instance of Arab countries establishing relations with the Jewish state since Jordan did so in 1994. The first breakthrough came with the Emirates on August 13, followed by Bahrain on September 11. Foreign ministers of both countries, as well as Israeli Prime Minister Benjamin Netanyahu, have flown to Washington for the ceremony.

“We are here this afternoon to change the course of history,” Trump said at the opening of Tuesday’s signing ceremony. “After decades of division and conflict, we mark the dawn of a new Middle East.”

In addition to bilateral agreements, the three countries are signing the ‘Abraham Accords,’ with the US as an observer, in hope that other Arab and Muslim countries in the region will also join. Trump himself has teased the possibility, saying the US is “very far down the road with five additional countries,” but would not name any of them.

Speaking at the White House, Netanyahu lavished praise on Trump, thanking him for “joining us in bringing hope to all of the children of Abraham.” He also thanked the Emirati and Bahraini governments, and expressed hope that more countries will join the accords.

“Peace requires courage,” said UAE’s Foreign Minister Sheikh Abdullah Bin Zayed, thanking Trump and Netanyahu for the “historic achievement” of the peace deal. “We are witnessing today a new trend that will create a better path for the Middle East.”

Bahraini Minister of Foreign Affairs, Abdullatif bin Rashid Al-Zayani, said that “For too long, the Middle East has been beset by conflict and mistrust.”

“Now I am convinced we have the opportunity to change that.”

Former White House aide K.T. McFarland told Fox News on Tuesday the administration apparently hopes for a “gold rush” of recognitions in the near future. Rumors of Oman, Sudan and Saudi Arabia coming on board have swirled around Washington, but the White House has been reluctant to confirm or deny anything.

“I think it’s sort of well understood that Bahrain has a very close relationship with them, but beyond that, I don’t want to get into, sort of, specific conversations that we had with the Saudis, although obviously we did travel there immediately after being in Bahrain,” a senior administration official told reporters on Monday’s background call.

UAE Foreign Affairs Minister Anwar Gargash said the decision to normalize ties with Israel was “the way forward” for the whole region, and has “broken the psychological barrier” for other countries. The UAE hopes Israel’s suspension of plans to annex Palestinian territory would contribute to preserving the two-state solution.

Tuesday’s accords are the product of a Middle East peace initiative spearheaded by Jared Kushner, Trump’s adviser and son-in-law. His two-prong proposal for peace between Israel and Palestinians – an economic platform unveiled in 2019 in Bahrain and the political plan revealed in January – have been met with disdain by all Palestinian factions, and was considered dead on arrival, until the deal with the UAE was announced in August.