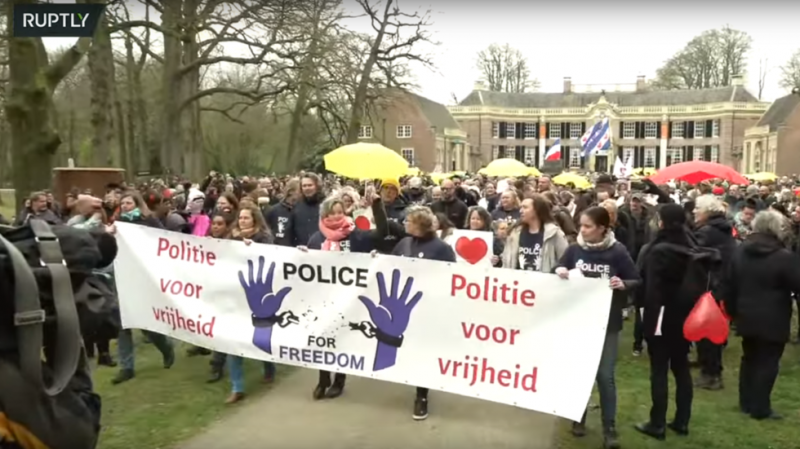 The protest took place outside historic Groeneveld Castle, located in the municipality of Baarn. A live feed by RT’s video agency Ruptly showed protesters gathering by the castle and then marching through the forest surrounding it into the town of Baarn.

The protest’s location was chosen after Groeneveld Castle opened to the public for the first time in months, becoming one of the pilot sites for post-coronavirus reopening. To gain admission, visitors must follow strict rules and provide a negative Covid-19 test result.

Previously, the protest organizers considered holding the march in other municipalities, but ran into trouble with the authorities. In Hilversum, the ‘Police for Freedom’ march was explicitly banned, while Apeldoorn issued an emergency ordinance prohibiting any demonstrations altogether.

The Dutch National Monument Organization (NMO), which supervised the pilot reopening of Groeneveld, has lashed out at the protesters for picking the castle as their target. NMO Director Marlo Reeders told local media it was “a great pity” the action took place at Groeneveld and ‘spoiled’ the re-opening.

“We were looking forward to the temporary opening and organized everything, including a string quartet to perform,” she said.

Despite the troubles that the protest ran into during its preparation stage, the event went off without incident. The protesters were closely watched by police, who did not intervene, and the march ultimately dispersed on its own.

The event was organized by a group called ‘Police for Freedom’. The body brings together retired police officers and soldiers, and has emerged in response to enduring anti-coronavirus restrictions, advocating freedom of movement, speech and gatherings.

Facing a spike in coronavirus cases, the Netherlands abandoned its laissez-faire approach to handling the coronavirus pandemic late last year, employing tight lockdown measures, including a nighttime curfew, to curb the spread of the disease. The restrictions have sparked a series of protests across the country in recent weeks, which repeatedly invoked a heavy-handed police response.

Since the beginning of the pandemic, the Netherlands registered more than 1.3 million cases of the disease, affecting a sizable proportion of the country’s 17.2 million population.