WATCH Antifa clash with Proud Boys in Portland, as police refuse to declare a riot & let violent brawls ‘resolve themselves’ 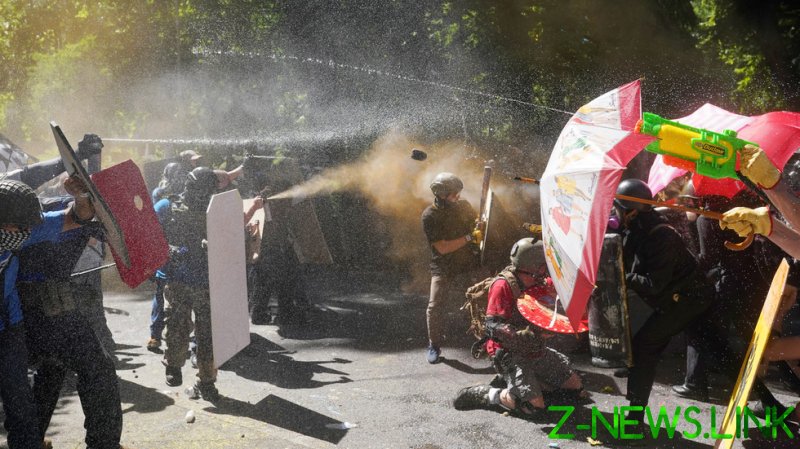 Responding to criticism over why the Saturday events downtown were not declared a riot, Portland police said the officers were heavily outnumbered and lacked crowd control resources to address such a massive and violent gathering.

Hundreds of people belonging to multiple rival groups with “various ideologies” descended on Downtown Portland around noon, while the police had “roughly 30 officers available for crowd management.”

As the leftist Antifa and Black Lives Matter activists clashed with right-wing groups led by Proud Boys, police remained on standby, providing “announcements asking for the groups to separate and move to the sidewalks and also to self-monitor for criminal activity.”

Sporadic brawls continued for several hours, with protesters in body armor and gas masks – many armed with bats and shields – rushing at each other, pelting various projectiles and deploying pepper sprays. Authorities claimed they watched the altercations closely, but:

Insisting their main goal was prioritizing life safety while balancing the First Amendment rights to free speech and assembly “regardless of the opinions expressed,” police however admitted that another reason for not intervening was the fact that the officers had been “the focus of over 80 days of violent actions.”

Police were only responding to certain incidents or criminal activity, like reports of a “male subject” pointing a firearm at the crowd.

When the disturbance subsided and shifted out of the park area across the street of the Justice Center, police moved in to seize several abandoned shields, as well as a “bucket containing condoms filled with an unknown liquid substance and a water bottle with what appeared to be urine.”