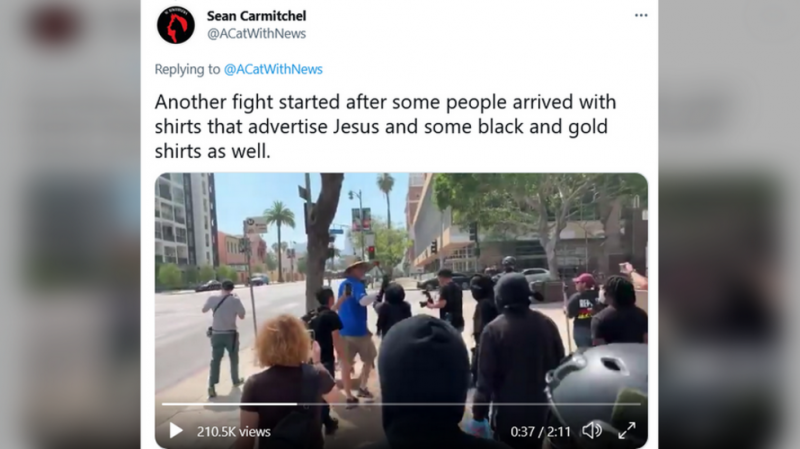 Video footage from Saturday’s rally outside the Wi Spa in LA’s Koreatown area shows several assaults and fights, including a man wearing an ‘Obey Jesus’ T-shirt  being knocked to the ground by counter-protesters after several demonstrators were assaulted and chased away. Another evangelist is then punched and knocked to the ground after trying to come to the man’s aid.

Another clip shows a woman being surrounded by a group of masked activists after her sign is taken away and ripped in pieces. Taunting counter-protesters rip off her hat and sunglasses. She then tries to reason with the mob, explaining that while she doesn’t oppose transgender women being allowed in the spa, “I just don’t want to see their penis.” The crowd then chants, “Go home transphobe.”

In another case, a young man standing by himself pulls out pepper spray after his sign is taken away and ripped, only to be chased down, thrown to the ground and punched and kicked by at least four black-clad activists who only stop when several apparent security guards come to his help.

Other incidents caught on video included assaults on another man and a videographer, as well as a couple being threatened and pushed as a mob forces them to leave. Demonstrators and counter-protesters are seen brawling in some footage.

Police arrived on scene after the scuffles broke out, forming a line to separate the groups. Antifa activists then set a dumpster fire in the middle of the street.

Counter-protesters also faced off with police, which declared unlawful assembly and deployed crowd control means as the situation got heated.

The rally and ensuing violence stemmed from a viral video last week in which a woman confronted Wi Spa’s staff, ranting that the business allowed a biological male to “go into the women’s section, show his penis to young little girls.” She later complained in an Instagram post that “Wi Spa allowed the man access just because he called himself a woman. This man was naked, exposing his testicles and penis slinging left to right in front of young girls, teens and grown women.”

Wi Spa stood by its policy, saying that it’s prohibited by state law from discriminating against customers based on gender identity.

A group known as SoCal Antifa and other Antifa accounts on Twitter called on followers to show up at Saturday’s rally to “smash transphobia” and “smash fascism.”