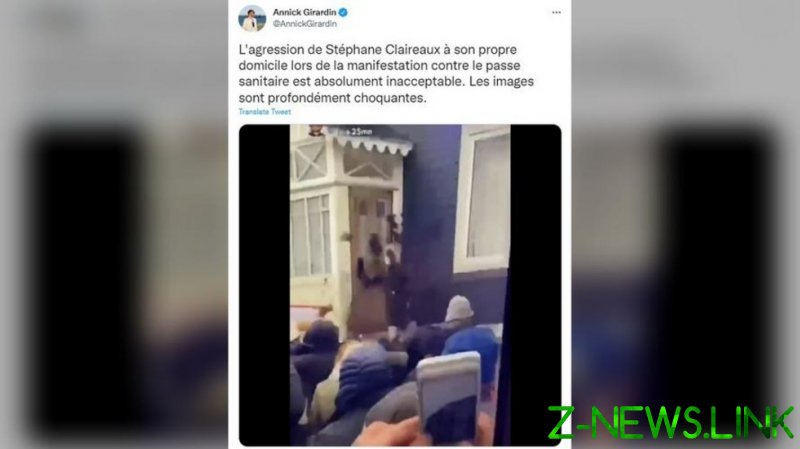 Protesters from the French overseas constituency of Saint-Pierre-et-Miquelon threw fistfuls of seaweed at their representative of the national parliament, angry over the vaccine mandate. The attack was condemned by politicians.

The heated confrontation took place on Sunday in France’s islands of Saint-Pierre-et-Miquelon in the western Atlantic. People unhappy with the government’s anti-Covid-19 policies and the introduction of the vaccine mandate gathered outside the home of Stephane Claireaux. The MP has been representing the constituency since 2014.

At one point the politician, who came out to speak to the crowd, was pelted with seaweed by the jeering demonstrators, footage of the incident shown. Annick Girardin, who held Claireaux’s seat in the National Assembly before joining the cabinet, denounced the incident, calling it “unacceptable.”

“This is not how we conduct the debate of ideas. I give my full support to the MP, who suffered a serious assault in front of his own family,” she wrote on Twitter, after sharing the video.

Similar reactions came from President of the National Assembly Richard Ferrand, who said his fellow legislator faced “intolerable aggression” at his home, and Minister of the Overseas Sebastien Lecornu, who described the incident as “deeply shocking.” Several public figures demanded that local authorities ensure the safety of the MP and his family.

A condemnation “without reservation” was also expressed by Stephane Artano, the senator from Saint-Pierre-et-Miquelon, whom Girardin called out for fanning anti-vaccine sentiment and criticizing Claireaux’s support of the mandate. In a statement, he said he only endorsed peaceful protests and that any abuse of a politician, who may have ideas one disagrees with, was against democracy. 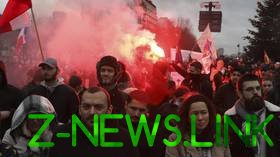 The protest in Saint-Pierre-et-Miquelon was part of a nationwide pushback against the mandate passed last week by the National Assembly, which would replace “health passports” with “vaccine passports” in France, making regular vaccinations effectively necessary to participate in public life. President Emmanuel Macron stated the imminent law was designed to “piss off” vaccine refuseniks.

Saint-Pierre-et-Miquelon is a small French overseas territory located just south of Canada’s Newfoundland and Labrador. It has about 6,000 residents, most of whom live in two communes. Since mid-November, the archipelago has reported a surge in Covid-19 infections.