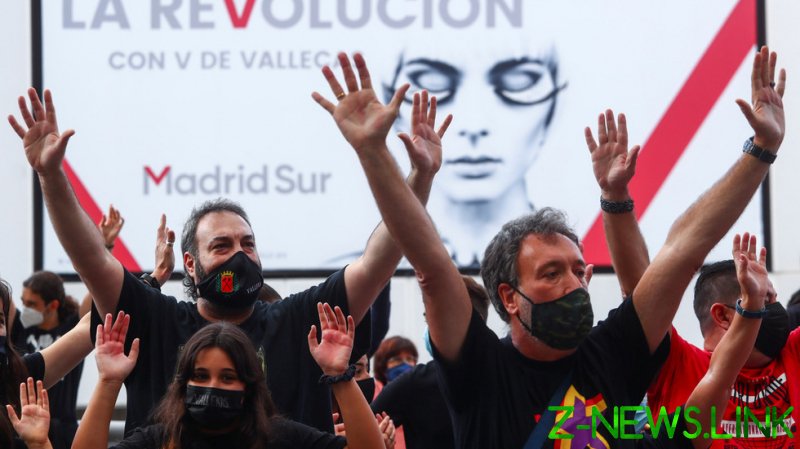 Last week, Madrid city council announced new restrictions for over one million of the city’s inhabitants, introducing localized restrictions on movement amid a surge in new cases of coronavirus.

Dozens of residents were involved in violent clashes with police last week, in what local media dubbed a riot. Eyewitness footage from the scene shows the ferocity of the police response in quelling the disturbances.

In one clip shared to social media, a police officer in riot gear was filmed headbutting a detainee.

Many claim working class and migrant neighborhoods are being stigmatized by the new restrictions as many residents are manual laborers who use public transport to commute to work, in what authorities consider another major viral infection vector.

Over one million people are subject to the new localized lockdown restrictions and may only leave their homes for work, medical or educational purposes and only if they carry supporting documents showing they have the necessary permission.

Some 45 restricted zones were identified due to their higher infection rate, tied to high population density relative to the rest of the city, in which cases currently exceed 1,000 positives per 100,000 inhabitants.

Madrid now ranks top among major European cities for new infections amid the so-called second wave of the 2019 coronavirus.

Local businesses must operate at 50 percent capacity and must close before 10pm. Gatherings are limited to no more than six people. The new measures will be reviewed every 14 days and may be extended on an open-ended basis.

A contingent of roughly 400 police officers, with support from the Spanish army, are conducting security checks in the 45 restricted zones.

Health advisers believe the restrictions do not go far enough and propose locking down the 3.3 million inhabitants of the Madrid metropolitan area.

According to the Johns Hopkins Coronavirus Resource Center, Spain has recorded over 715,000 cases of Covid-19 cases, resulting in 31,000 deaths.

A memorial incorpoating thousands of Spanish flags was held in Madrid over the weekend in honor of those who died during the first wave of the pandemic.