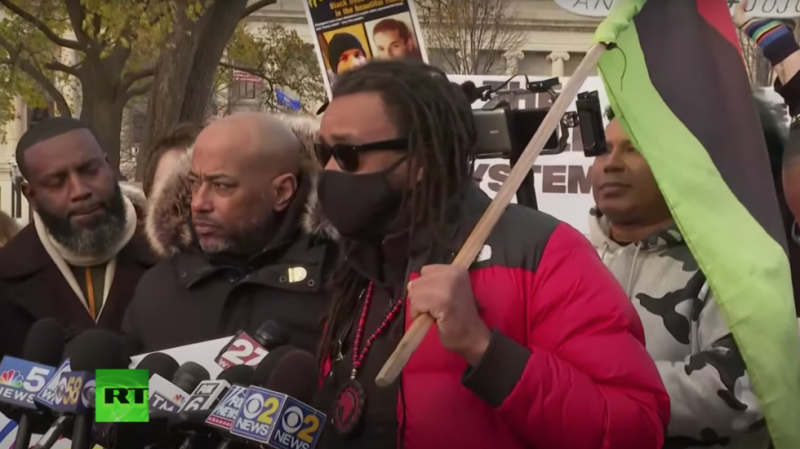 Among several dozen people that gathered on Sunday was Justin Blake, uncle to Jacob Blake who was shot and injured by Kenosha police. Blake appeared to have blamed Biden for the verdict, accusing the president of betraying his supporters.

“President Biden sold us out. He betrayed our families. He betrayed the people behind us,” Blake reportedly told a crowd of demonstrators.

Biden’s initial reaction to the Rittenhouse verdict last week did not go down well with some of his supporters after the president said “the jury system works” in the immediate aftermath of the jurors’ decision not to find Rittenhouse non-guilty on all five charges that he was facing.

In a followup statement, however, Biden said he and others felt “concerned” and “angered” by the jury’s decision.

Rittenhouse maintained through the trial that he acted in self-defense when he shot and killed two men and injured another during Black Lives Matter protests in the city in August 2020. The protests were marred by violence, looting and vandalism.

Blake, who appeared at a previous Kenosha protest with activist Rev. Jesse Jackson, claimed the problem of police violence against minorities “goes all the way to the White House,” adding that “nothing’s been done” under Biden and he hasn’t supported the families of victims of police shootings, like George Floyd’s family.

“Where has he been for the Floyd family?” Blake asked, demanding he and others be invited to the White House to see a plan of action is being put in place.

Grant also called for those who had “sympathy” for Rittenhouse to show the same sympathy for Chrystul Kyler.  Kyler, who is black, was convicted at 17 of first degree homicide for shooting a man sexually assaulting her and others. Her case is currently waiting on an appeal with the Supreme Court. Activists on Sunday argued the apparent difference in how the Rittenhouse’s and Kyler’s cases are being treated exposes a hypocrisy in self-defense cases, while others have said the Rittenhouse verdict may help Kyler’s own case.

Protesters on Sunday marched in Civic Center Park in Kenosha. Demonstrators carried signs with messages such as ‘the whole system is guilty’ and ‘Party for Socialism and Liberation’. When the protesters marched, at one point they chanted, “Anthony and JoJo,” in reference to Anthony Huber and Joseph Rosenbaum, the two men Rittenhouse shot and killed.