Home / WORLD / WATCH: Activist swarmed by group of attackers after protesting against use of puberty-blocking drugs on children

WATCH: Activist swarmed by group of attackers after protesting against use of puberty-blocking drugs on children 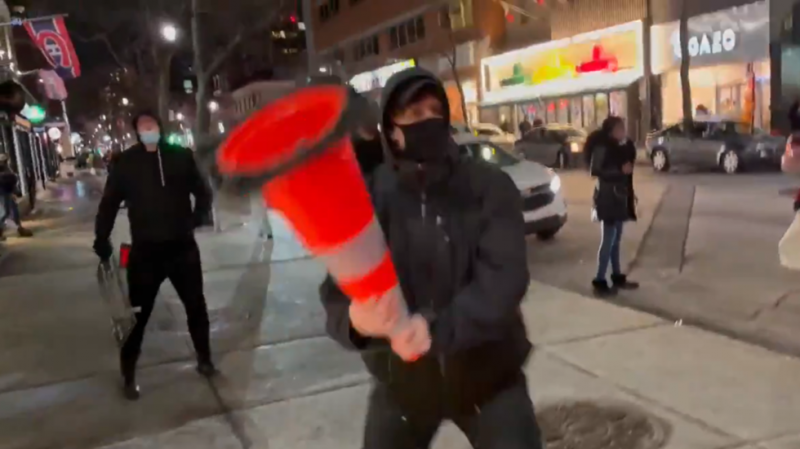 The incident occurred on Friday night in downtown Montreal, where Vancouver resident Chris Elston said he was having a “peaceful conversation” with a local man when about seven “thugs” swarmed him. Video footage shows several assailants, including at least one woman, pursuing Elston and another man, hitting them with traffic cones and demanding that they leave the area. At one point, one of the attackers hurls a yellow substance toward the men.

Elston said he caught the footage on his smartphone after his sign and bodycam were stolen by the attackers. He said the initial assault included punches to his face and the back of his head. His forearm was broken from blocking blows with the traffic cones, and he suffered a popped vein in his hand and a fat lip.

“If criminals think an assault is going to slow me down, they’re dead wrong,” Elston said on Twitter. He added, “Sticks and stones may break my bones, but children still can’t consent to puberty blockers.”

Elston posted a picture of himself with several sandwich-board signs, including one saying, “Children cannot consent to puberty blockers.” Another said, “Children are never born in the wrong body,” while the third appears to show a definition for “dad,” namely: “a human male who protects his kids from gender ideology.”

Elston has pushed some politically sensitive buttons back in his home city of Vancouver, too. He and a friend, Amy Hamm, paid for a massive billboard ad which read “I love J.K. Rowling” last September. The billboard was condemned by a city official as “hateful expression,” in as much as it expressed support for the allegedly transphobic ‘Harry Potter’ author, and it was covered up after just one day.

Elston has also had physical confrontations while wearing sandwich-board signs at events in Vancouver. He was arrested last October, reportedly for “causing a disturbance.” Elston posted a video of a man allegedly plowing into him, at which point he was grabbed from behind by police and arrested.

On Friday night in Montreal, Elson said he refrained from fighting back, because he feared that he would be arrested for defending himself.