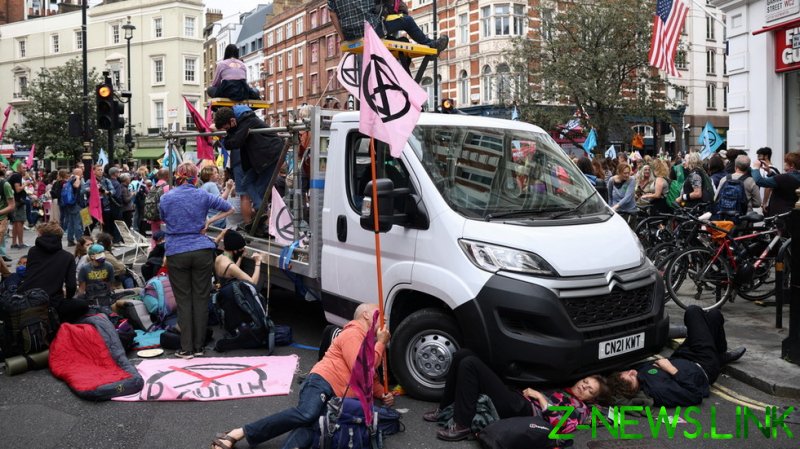 The environmentalist group gathered near London’s Trafalgar Square on Monday, where protesters attempted to shut down a roundabout, some chaining themselves to a pink, 4-meter tall structure carrying the words “Come to the table.” Others were seen crawling under cars in an effort to block the road.

The demonstration came soon after Extinction Rebellion declared a new protest campaign it dubbed “the Impossible Rebellion,” saying it plans to hold “disruptive actions” across London for two weeks straight, including “occupations” of public spaces.

With the activists having announced their intentions, however, police were out in force at the protest site, forming a tight perimeter before making at least 52 arrests throughout the day.

Officers were seen gearing up to remove demonstrators, and later carrying out arrests, in some cases dragging away non-compliant protesters.

A number of children were also seen at the gathering, including an 11-year-old girl who delivered a speech echoing the environmental group’s message.

“The animals and plants had this planet before we did, and we came and destroyed it,” she told the crowd, adding “We did this, so we need to fix it.”

Before the arrests began, police reportedly announced through a loudspeaker that the protest had been declared an unlawful gathering, sharing an order on social media while saying the demonstration could result in “serious disorder, damage, disruption or intimidation.”

By around 8:30pm local time, only a small number of protesters were left at the site, with the rest cleared away by police or leaving on their own accord. Even as the event died down, the pink ‘table’ structure was still seen in the road after sundown, with a sizable group of officers milling around nearby to contain the remaining protesters.

Earlier on Monday, Extinction Rebellion co-founder Gail Bradbrook clashed with a local radio host during an interview, stoking criticism after she acknowledged she drives a diesel car and had traveled on fuel-guzzling airliners for vacations. While she argued she can’t afford a more eco-friendly electric vehicle, the host nonetheless dubbed her a “hypocrite” during the exchange, which triggered similar commentary online.

Extinction Rebellion is a collective of climate change activists, known for its prediction of an imminent climate catastrophe and colourful theatrics. The protesters urge the UK to go carbon-free by 2025, arguing that the government must declare a “climate emergency.”