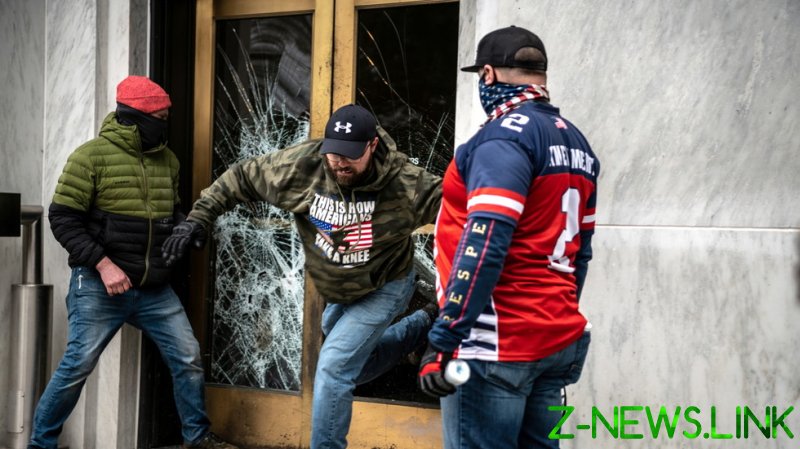 Tear gas and pepper bullets were deployed by police after people smashed glass doors and tore down tarps while trying to gain access to the building.

Roughly 100 protesters, including members of the right-wing Patriot Prayer group, engaged in a six-hour standoff with armed riot police from the Oregon State Police and Salem Police Department.

One man is reportedly on the run after attempting to break into the building and then attacking journalists filming the incident.

“We’re standing up for our constitutional rights to be here for this legislative hearing and for our rights to re-open the state of Oregon,” said protester Crystal Wagner, as cited by The Statesman Journal.

“We are the people, we are the taxpayers. We’re here to fight for our democracy.”

Local lawmakers, several staff and reporters were the only ones present for the hearings but the meeting was broadcast on televisions which were visible outside the Capitol building.

The anti-lockdown demonstration began at roughly 8:30am local time, and several protesters managed to gain access to the building for a short time. They were confronted by law enforcement at which point “the altercation became physical,” according to local officials.

One protester deployed some form of pepper spray and was met with a volley of pepper balls from armed OSP officers.

Law enforcement attempted to clear the area at around 9am after the gathering was declared unlawful, at which point one of the protesters deployed bear mace against officials.

The man, later identified as Ryan Lyles, 41, was arrested and charged with felony possession of body armour and unlawful use of mace.

“We accomplished two very important things … We put the fear of God in the citizens of our state. They know we’re not messing around anymore,” protester David Klaus told the crowd, according to The Statesman Journal, adding that the demonstrations had shamed, “traitorous law enforcement officers” and warning that “what happens next is on them.”

At one point, the building’s fire alarm was triggered but this turned out to be a false alarm.

“It doesn’t feel normal. And it feels really sad,” she said.