Home / WORLD / Washington’s scapegoating of Pakistan for US failure in Afghanistan was ‘most painful thing,’ PM Khan tells RT 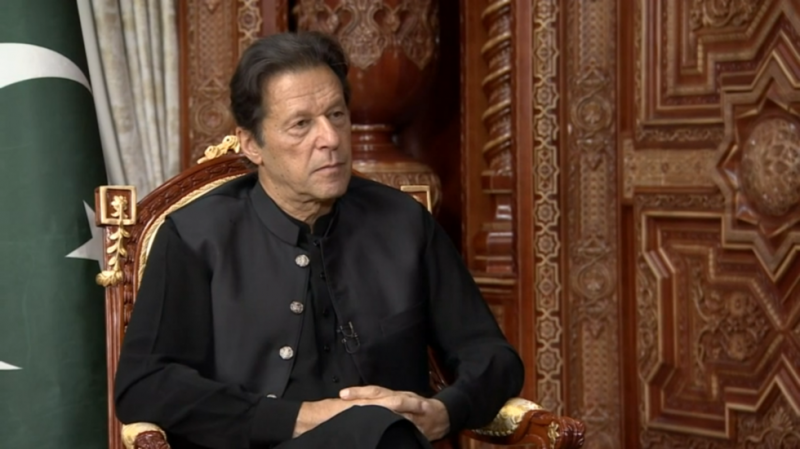 Speaking to RT, Khan expressed his anger towards American officials who have pointed fingers at Islamabad when apportioning blame for the US failure in Afghanistan. He highlighted the recent Senate Foreign Relations Committee hearings as an example of this frustrating rhetoric.

“As a Pakistani, I felt deeply hurt by some of the remarks made by those senators. To blame Pakistan for this debacle in Afghanistan is the most painful thing for us to listen to,” he said.

Pakistan was in a tremulous situation when the 9/11 terrorist attacks occurred in the US. Pervez Musharraf, a general who’d come to power through a military coup, had just been elected president and was seeking US assistance for his government. Committing Pakistani support to the invasion of Afghanistan helped secure American military aid, but, Khan believes, was still a wrong call. It alienated the ujahideen forces, which the Pakistani intelligence helped build up just two decades ago as part of the US anti-Soviet campaign in Afghanistan.

“We have trained them to fight against a foreign occupation. It was a holy war, a jihad,” he said. And with the Americans invading, Pakistan was telling the same people that “a fight against the Americans was terrorism. So they turned against us. They called us collaborators.”

The Afghan insurgency naturally found allies in Pakistan’s tribal areas along the border. The Pashtun tribes living there had an ethnic connection with the predominantly-Pashtun Taliban, so many supported the Taliban against Islamabad. And the country suffered.

“There were insider attacks against the Pakistani army, who had trained the mujahideen,” the prime minister said. “There were two suicide attacks on general Musharraf from within the army.”

Drone wars unleashed on Pakistan under the Obama administration to push back the insurgency didn’t help either, he added. It was “the only time in history when a country was being bombed by its ally. 280,000 drone attacks were conducted in Pakistan by the US.”

Khan estimated the cost of helping the US with a war, that had nothing to do with Pakistan in the first place, at 80,000 in lost lives alone. There were also tens of thousands maimed and significant economic damage. Being accused of “double-dealing” and providing a “safe haven to the Taliban,” as chairman Robert Menendez put it during the Senate hearings, felt like the US refused to acknowledge all those sacrifices, Khan said.

The situation in Afghanistan was the main topic of the interview, which the prime minister gave to RT on the sidelines of the Shanghai Cooperation Organization (SCO) summit in Tajikistan. The Asian security bloc includes many neighbors of the country that is now under Taliban control. One of them, Iran, had its status in the organization upgraded to full membership during the gathering.

Khan said that, while his country is not in a rush to recognize the new Taliban government as legitimate, the world community needs to assist the militant movement in stabilizing Afghanistan, because the alternative would be bad for everyone.

“I think the only one choice left is to incentivize [the Taliban], to encourage them to stick to the promises and announcements they have made about an inclusive government, about human rights, [about] giving amnesty to everyone,” he said. “Hopefully, if it works, you can have peace in Afghanistan for the first time in 40 years.”

Punishing the Taliban with sanctions and isolation would cause suffering to the Afghan people, he said. The US-backed government relied on foreign aid to fund most of its budget, so “if foreign aid disappears, the country will collapse,” he warned. A chaotic Afghanistan would be a breeding ground for international terrorism and a source of refugees, which would have implications all over the world.

Unfortunately, so far the Taliban was not particularly forthcoming on doing what it had promised, as exemplified by who was included in its new cabinet. Khan believes the victory over the US, which was a formidable feat, made many people in the movement’s military leadership want to reap rewards, consequences be damned.

The Taliban’s was “one of the most epic struggles anyone could have gone through. After 20 years, they have survived one of the greatest military machines in the history of mankind,” he pointed out.

“Yet I think within the Taliban there are people who feel that unless they get all other minorities, sects and groups, until they get everyone under their umbrella, their government will remain unstable,” he added. Such an inclusive government is the only thing that can lead Afghanistan to long-term stability, Khan believes.