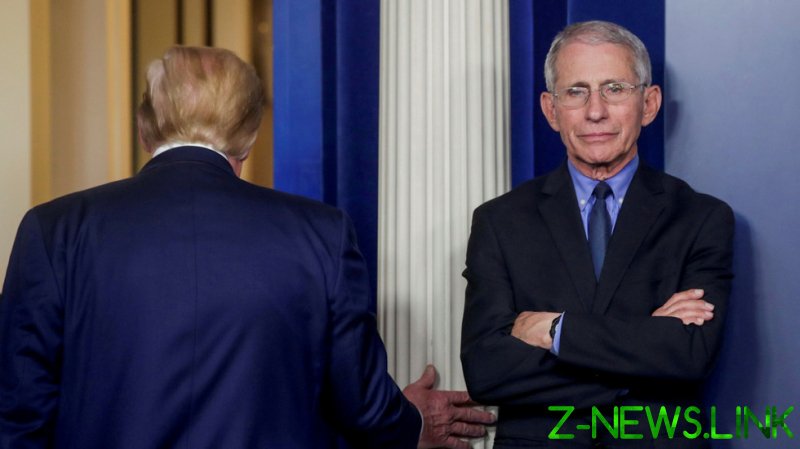 Washington Mayor Muriel Bowser announced the proclamation on Wednesday, saying that in honor of his 80th birthday, Christmas Eve will be celebrated as Dr. Anthony Fauci Day. “We are incredibly proud to count Dr. Fauci among the many DC residents who are sacrificing so much to keep our communities healthy and safe,” she tweeted.

Bowser didn’t indicate what sacrifices Fauci is making. Her proclamation noted that he has been “a shining light in dark times for the nation, promoting truth over fear and giving Americans hope in their government.”

While President Donald Trump was blamed for the more than 300,000 US deaths attributed to Covid-19, the pandemic made Fauci a celebrity. He was chosen in July to throw out the first pitch on Opening Day for the Washington Nationals baseball team. He was given several awards, including one presented by fellow superstar Elton John. Time magazine named Fauci one of the most influential people of 2020. He has his own fan club on Twitter.

And like lawyer Michael Avenatti before him, as he became increasingly willing to criticize Trump, he became a bigger and bigger star for mainstream media outlets. He essentially endorsed Biden in a Washington Post interview a few days before the November 3 election.

Just last week, Fauci went on CNN’s Sesame Street Special to assure children that they shouldn’t worry because he had flown to the North Pole to give Santa Claus a Covid-19 vaccine. He could only hope that the children didn’t notice that he said a few weeks earlier that Santa wouldn’t need inoculation because of his “innate immunity.”

Perhaps more importantly, Fauci flip-flopped on his Covid-19 advice, such as whether to wear masks and reopening schools. His tone on prospects for a return to normalcy change dramatically after the election, going from doom and gloom to optimism. In March, he advised that going on cruises is fine for healthy young people.

In light of all that, the idea of celebrating Dr. Anthony Fauci Day didn’t sit well with some conservatives. “Fauci was always a Democrat operative there to hurt Trump,” author Mike Cernovich tweeted. “Never should have been given center stage.”

Radio host Jesse Kelly was among those calling Fauci a beneficiary, rather than a hero, of the Covid-19 crisis. “Coronavirus is the greatest thing that ever happened to Dr. Fauci,” he said.

Some observers seethed at Bowser’s assertion that Fauci had made great sacrifices. Others were turned off by Fauci’s apparent enjoyment of the limelight. “He loves it,” one commenter said. “You can see the glee in his eyes whenever he’s interviewed. It’s sick.”

But Fauci fans were thrilled by the proclamation, praising Bowser for finding a way “to honor our heroes.” One grateful observer said no one deserves such an honor more, while another said, “Ready and waiting for the movie about Dr. Fauci.” Still another gushed, “Happy birthday to this year’s most important guy!” One suggested that Biden give Fauci a Medal of Freedom.

Senator Amy Klobuchar (D-Minnesota) put yet another political spin on Fauci, saying he “will soon work for a president who believes him, rather than seethes at him.” Author Tim Young took issue with her, pointing out that Fauci has repeatedly said Trump listened to and heeded his advice on Covid-19 mitigation measures.