Home / WORLD / Washington thought it could divide Russia & China. But, despite their differences, they’re still set on standing up to US hegemony 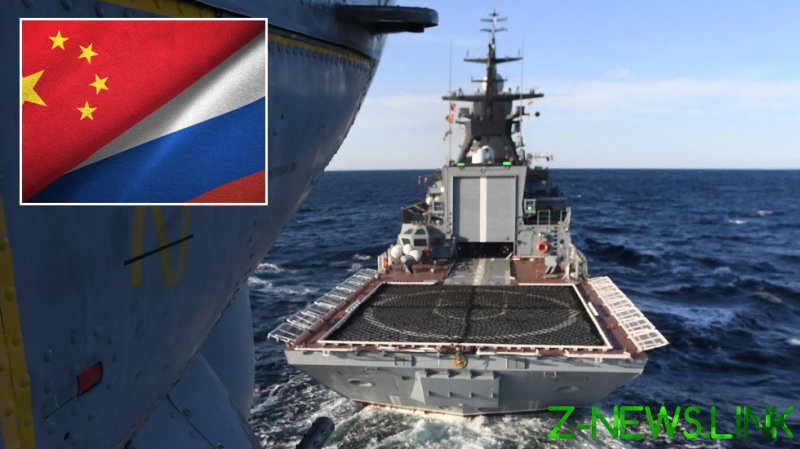 The drills, Maritime Interaction 20201, took place in the Sea of Japan earlier this week. Chinese media has instantly proclaimed that the wargames serve as a counterweight to the newly-announced AUKUS pact between Washington, London and Canberra. The trio of nations have agreed to share nuclear submarine technology and strengthen their joint operations as part of growing US-led efforts to encircle and contain China.

Last week, Russian Foreign Minister Sergey Lavrov reiterated Russia’s position on the increasingly tense question of Taiwan. According to him, Moscow “considers Taiwan to be part of the People’s Republic of China”.  He added that “we have proceeded and will proceed from this premise in our foreign policy”. Expanding on that position earlier this month, President Vladimir Putin expressed confidence that China could resolve the Taiwan issue without open conflict.

The rapid fire of commentary from the Kremlin and the increased focus on the Pacific region is no coincidence. There is an important diplomatic message being told: Russia is seeking a closer partnership with China, on a broader range of issues, in the face of policy put forward by US President Joe Biden’s White House.

While Moscow has always effectively adhered to the “One China Policy”, an unchanged aspect of the Soviet era, the public statements on the issue nonetheless mark a supportive nod towards Beijing as both countries grapple with growing pressure, containment efforts and strategic competition from the United States.

In Northeast Asia specifically, these growing shared interests have led to increased military cooperation. Although their partnership is not a formal alliance, it is nonetheless a necessary buffering of mutual strategic frontiers in the view of facing common adversaries. There are important differences between Moscow and Beijing, but nonetheless, the “enemy of my enemy is my friend” logic is in the leading conventional wisdom of the time.

What is pushing Russia and China together?

Neither Russia nor China seem to have the desire to build “a new world order of their own,” as is sometimes suggested in the West. However, the two share common grievances and opposition to an international system dominated by the US, which has sought to limit both countries economically, politically and militarily. This has led to a mutually beneficial field of interest and a determined shared narrative about the defense of their sovereignty. This shift has been well underway for years, but since 2020 has come to maturity as the US has placed “great power competition” at the forefront of its foreign policy agenda.

Whilst Moscow and Beijing frequently focus on different spheres, from Southeast Asia to Central Europe, both countries recognize that the strategic capitulation of the other in either aspect would be a win for American hegemony in the international arena.

As a result, both states perceive the other as an important pillar in upholding their national sovereignty, territorial integrity and the survival of their political systems which have faced increased challenges in the wake of expanding US political and ideological power. At the same time, the pair have become important sources of military procurement and trade, with the risk of embargoes and tariffs ever-present with many other partners.

This creates not so much an alliance, but an increasingly important strategic counterweight to US dominance. The sphere of military cooperation between Russia and China has been concentrated most solely upon, albeit not limited to, Northeast Asia wherein both countries share a common geographic space and identical challenges. In particular, both have concerns over Japan’s close ties with the US, where Washington often calls the shots in terms of military strategy. Both countries apparently want to check Tokyo, and so the focus of their joint military exercises has been centered around the island nation.

Limits on the partnership

However, there are areas in which Beijing and Moscow are not entirely convenient partners for each other. Moscow has no presence in the South China Sea, a vital theater for Beijing, or near to the Indian subcontinent.

Another area of difference is Central and Eastern Europe, where the US is working to pry many nations away from close ties with China and into stand-offs with Russia. Beijing’s position here may change slightly, but nonetheless, its considerations to the EU are purely economic and strategic as opposed to military, while Moscow is still concerned about NATO’s eastward expansion. Both countries also have very different visions of what they seek from Europe, although they did conduct a joint naval exercise in the Baltic in 2017.

When it comes to the Taiwan issue, Russia is supporting Beijing, but has backed the idea that China can resolve the issue peacefully. As pointed out by the director general of the Russian International Affairs Council, Andrey Kortunov, in an op-ed for Global Affairs, the US likely does not have the will to go all out in favour of complete Taiwan independence and is increasingly unreliable with its support for regional allies. In this light, Moscow’s position makes sense – there is no need for military conflict in any case.

Kortunov also argues that Moscow’s position is motivated by the experience of America weaponizing regional states against Russia in similar containment efforts, as well as a broader rejection of separatism as a whole. As a result, it is in Russia’s national interest to see China succeed on the Taiwan issue, particularly because the idea of the US working to break up nations from afar is a concern for Moscow as well. Therefore, as Western countries have ramped up their support for Taiwan, Russia has increased its rhetoric backing Beijing. While it is unlikely to influence Beijing’s policies, the support lends political weight to China’s position.

The rapidly changing strategic map of the world has opened up a growing space for common strategic interests between Russia and China. American foreign policymakers like to toy with the dream of breaking the two countries apart, as evident from John Bolton’s recent interview with RT.

However, they are finding out it is not that simple, and the trend is that the East is entrenching, rather than wavering in the face of pressure from the West. Both Russia and China see each others’ political successes in the context of what it means for them in the international order as a whole. It is a choice between standing together in fields of common interest, or facing the US’s hegemony on their own.