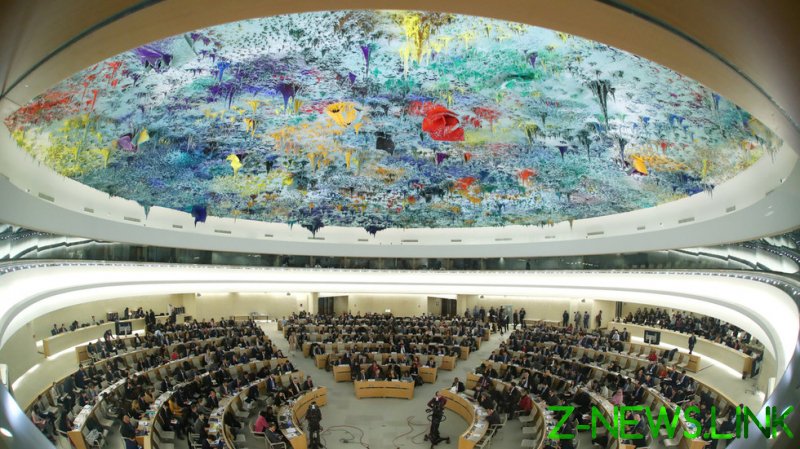 Touting the Biden administration’s supposed return toward “a foreign policy centered on democracy, human rights, and equality,” the newly-appointed diplomat tore into the council over its efforts to hold Israel accountable for its ongoing violations of international law.

“We recognize that the Human Rights Council is a flawed body, in need of reform to its agenda, membership, and focus, including its disproportionate focus on Israel,” Blinken told reporters on Monday, declaring that “effective use of multilateral tools” was central to Washington’s mission.

Blinken went on to complain that rather than taking action to “encourage meaningful change,” the Trump administration had left a “vacuum of US leadership” by withdrawing from the UNHRC in June 2018. However, he did not give any hints as to when (or if) the US would fully rejoin the council, whose 47 members are elected for three-year terms on an overlapping basis.

On its way out of the council’s door in 2018, the Trump administration slammed the UNHRC as “hypocritical and self-serving” and condemned its “chronic anti-Israel bias” – even as then-US ambassador to the UN Nikki Haley was being conspicuously showered with over half a dozen honors and awards by Israel and its numerous lobbying groups for pushing US policy in its favored direction.

In addition to pulling the US out of the council, Haley also oversaw the defunding of the international aid organization for Palestinian refugees and their descendants known as UNRWA in 2018, just a few months after Israeli PM Benjamin Netanyahu suggested the US pull its funding from the group.

The Biden administration has also expressed a desire to rejoin the Iran nuclear deal, though its insistence that Iran stop enriching uranium before Washington even lifts a finger to relieve sanctions is unlikely to find many takers in Tehran. Such ’backseat diplomacy’ oddly resembles that of the Trump era, when the administration made increasingly hysterical demands against the Islamic Republic despite having no legal standing regarding the treaty it had pulled out of in 2018.

Israel has repeatedly thrown diplomatic tantrums regarding the UNHRC’s criticism, and in October demanded that “world democracies” leave the council. House Republicans echoed their line in a letter sent last week, lamenting that to rejoin the UNHRC would be legitimizing “some of the most oppressive regimes in the world.”

Israel has complained about being hit with over 40 UN resolutions despite its being “the one genuine democracy in the Middle East.” Still, many of those resolutions were shot down by US veto, and Israel has been illegally occupying what under international law is considered Palestinian territory for decades.

Tel Aviv may be feeling especially uncomfortable after the International Criminal Court last week cleared the way for a war crimes investigation into the actions of the Israeli military in Gaza and the West Bank. The Trump administration had attempted to divert a similar ruling that would have allowed the ICC to investigate US war crimes in Afghanistan by effectively sanctioning high-ranking individuals of the court and preventing their entry into the US – sanctions the Biden administration has promised to “review” according to the AP.