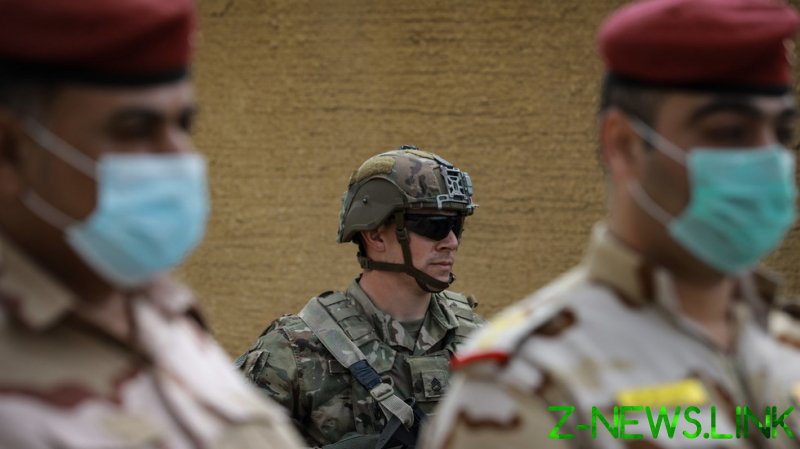 A statement referring to a pullout of American troops from Iraq was released by the office of Prime Minister Mustafa al-Kadhimi after he met with Brett McGurk, the White House special coordinator for the Middle East and North Africa.

“Discussions took place about mechanisms for [US] combat troops’ withdrawal from Iraq, and moving forward to a new stage in strategic cooperation,” the Tuesday statement about the Baghdad meeting said.

A senior official in the US administration told Newsweek that “this was not true,” when asked for comment.

Iraq hosts some 3,500 foreign troops, including 2,500 American soldiers, who are ostensibly on the ground to help the Iraqi government prevent a possible resurgence of the terrorist group Islamic State (IS, formerly ISIS).

Last year, the US carried out the assassination on Iraqi soil of Iranian General Qassem Soleimani. In addition to killing Soleimani and his aides, the airstrike killed five Iraqi nationals from the welcoming party, including Abu Mahdi al-Muhandis, the deputy commander of Iraq’s state-backed Popular Mobilization Committee militia.

The killings outraged the Iraqi side, with the parliament subsequently voting to order a full withdrawal of foreign troops from their country, which the Trump administration ignored. Under Biden, the two sides are engaged in talks about an eventual withdrawal of combat troops and Pentagon’s shift to “advisory role” in Iraq, but the US is apparently in no hurry to proceed. PM al-Kadhimi is scheduled to visit Washington later this month for further discussions on the issue.

Iranian-led forces hostile to the US presence are regularly targeted by US bombing operations, with the latest one conducted on both sides of the Iraqi-Syrian border in late June. Baghdad condemned the strikes as a “blatant and unacceptable violation” of its sovereignty and national security.

The US Iraq policy is in contrast to its approach in Afghanistan, where the Biden administration ordered a major withdrawal in April. By the end of August, only American soldiers guarding the US embassy in Kabul and its international airport and Pentagon’s special operations troops are expected to stay behind.

The pullout comes two decades after the US-led invasion of Afghanistan, which was meant to push out Al-Qaeda operatives, but turned into a lengthy and costly exercise in nation-building that apparently ended in a failure.

The invasion of Iraq in 2003, which resulted in the toppling of Saddam Hussein, likewise failed to produce a stable government capable of defending itself, as evident by the rise of IS in 2014. Soleimani, the slain general, was a leading figure in the Iran-backed military campaign to push back IS terrorists in Syria and Iraq.