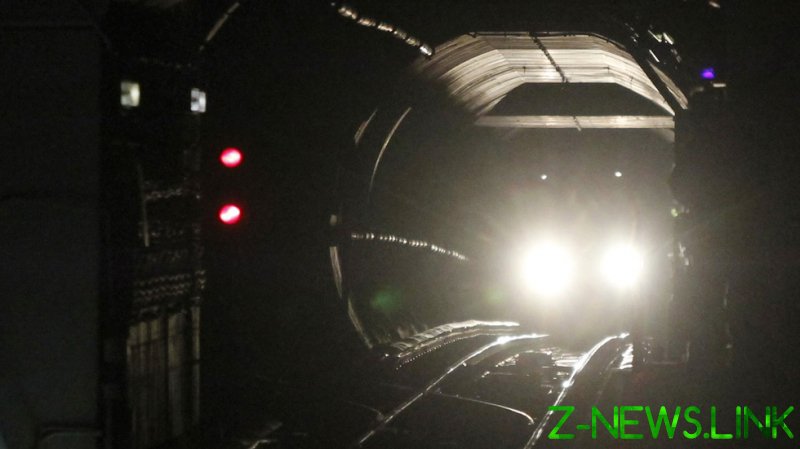 Service between the Pentagon and Foggy Bottom was suspended on Tuesday afternoon, after a Blue Line train derailed in the Rosslyn tunnel, local media reported. Only one of the cars in the train, with 25 passengers on board, had lost contact with the rails – but that stranded the entire 12-car train, with an estimated 400 people stuck in the tunnel for over an hour.

Video from the train showed masked passengers looking at their cell phones as all the lights had gone off.

Firefighters and other emergency service personnel were deployed to the Rosslyn and Arlington Cemetery stations, with the intent to evacuate the passengers affected. They will have to walk through the tunnel, over a distance of about 650 yards (600-plus meters).

The evacuation began around 6:30 pm local time – almost 90 minutes after the derailment.

The Blue line connects the southern end of DC’s Virginia suburbs with those in eastern Maryland in an S-shaped path. The Rosslyn tunnel also serves the Orange and Silver lines that run east-west, while a rail bridge across the Potomac serves the Yellow line going north-south.

The Washington Metropolitan Area Transit Authority (WMATA) system is relatively new by the standard of international subways, with construction starting in 1969 and the first line opening in 1976. The original system, 103 miles (166 kilometers) long, was finished in early 2001. The Silver line, which is intended to link DC with the Dulles International Airport in Virginia, is still under construction and expected to become fully operational by sometime in 2022.

Poor maintenance has caused a number of problems for WMATA in recent years, including derailments, collisions and fires. In the spring of 2016, WMATA implemented a one-day shutdown to assess the system’s safety and launched extensive repairs.

While the number of Metro riders has dropped significantly since the start of the Covid-19 pandemic, as most employees in the capital who can do so continue to work from home, the service workers remain reliant on the rail service to get to and from their jobs.