Home / WORLD / Was that 1992 or ‘1984’? Trump haters call on Hollywood to DIGITALLY REMOVE president’s cameo appearance from Home Alone 2

Was that 1992 or ‘1984’? Trump haters call on Hollywood to DIGITALLY REMOVE president’s cameo appearance from Home Alone 2 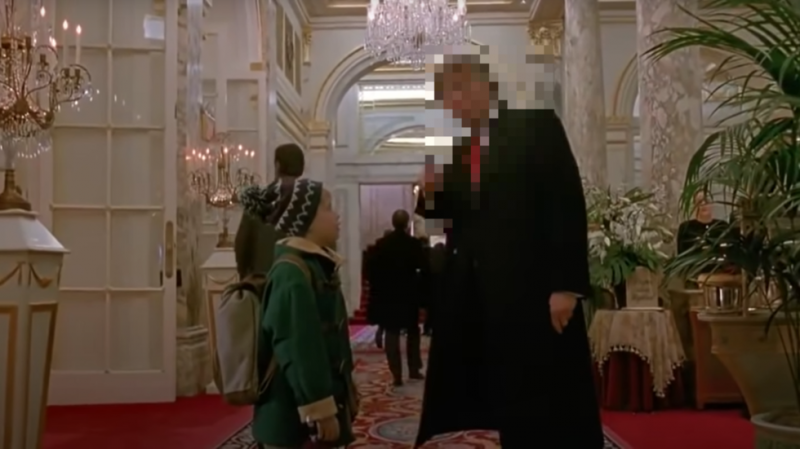 Of course no such announcement was made, and Plummer, by the way, was the actor who was used to replace Kevin Spacey in ‘All the Money in the World’ after Spacey had been accused of sexual assault. But there’s clearly a growing tide of left-wing pressure to replace the short scene in which Trump tells Macaulay Culkin’s young character where the lobby is at New York’s Plaza Hotel.

It also appears that Walt Disney Co., which had purchased 20th Century Studios and now owns distribution rights to the movie, might be receptive to the idea of punishing Trump for allegedly inciting his supporters to breach the US Capitol on Wednesday.

“What we saw was an egregious and inexcusable assault on America’s most revered institution and our democracy…,” Disney said in response to the violent protest. “Now, more than ever, it is imperative that we come together as one nation – united by our shared values, including decency, kindness and respect for others.”

Others vowed to make sure that Trump is scrubbed from the movie. “I won’t rest until he is removed from that scene,” social media commentator Matt Navarra tweeted.

Author and podcast host Andrew Hunter Murray went even further, saying Trump must be “tried, imprisoned and digitally removed from ‘Home Alone 2.’” Columnist Iain Martin quipped that Trump would be stung most by removal from the movie.

Martin could be on to something. A Canadian broadcast version of the movie was edited to remove Trump’s scene, making room for more commercials. The tweak apparently struck a nerve with Trump in 2019, when he tweeted, “I guess Justin T (Trudeau) doesn’t like my making him pay up on NATO or trade!”

The push to expunge Trump comes as members of Congress call for him to be ousted by his own Cabinet or impeached after he blamed his election defeat to Democrat Joe Biden on massive fraud and called on his supporters to protest against congressional certification of his rival’s victory.

Lehigh University in Bethlehem, Pennsylvania, responded by revoking and rescinding an honorary degree that it had awarded to Trump in 1988. Twitter and Facebook banned the president from using his social media accounts.

“This is the moment I’ve been waiting for,” one Twitter commenter said. “I can’t wait until we remove the name Trump from every building. Tear down his legacy and everything he stands for, like the ancient Egyptians did to Akhenaten.”

Others likened the new trend to George Orwell’s ‘1984,’ where “every record has been destroyed or falsified, every book rewritten, every picture has been repainted, every statue and street building has been renamed, every date has been altered… Nothing exists except an endless present in which the Party is always right.”