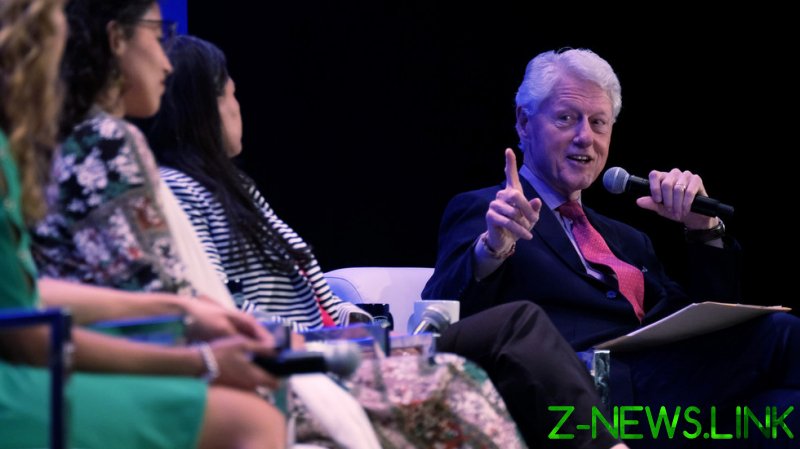 Hosted by the Clinton Foundation, the event kicked off on Tuesday and will continue into Friday, when Harris and Clinton will sit down for a “one-on-one conversation” to discuss “the impact of the Covid-19 pandemic on women, and empowering women and girls in the US and around the world,” according to a foundation press release.

While the topic itself did not stoke controversy, the decision to have Clinton co-host the sit-down immediately made waves, as netizens pointed to the former POTUS’ reputation as a serial womanizer, largely attained over the Monica Lewinsky sex scandal, in which Clinton, then 49, had an affair with a 22-year-old White House intern and later lied about it. He has faced charges of sexual impropriety, assault and even rape from several other women, including Paula Jones, Gennifer Flowers, Kathleen Willey and Juanita Broderick.

“There are 7 billion people on Earth and they couldn’t find literally anyone else to talk about empowering women with than Bill Clinton?”asked the Daily Caller’s Greg Price, who was promptly answered by another netizen: “Why? Bill Clinton LOVES women.”

Others recalled Clinton’s relationship with accused pedophile and sex trafficker Jeffrey Epstein, who was found dead of an apparent suicide in a Manhattan prison cell in the summer of 2019 after he was arrested on child trafficking charges. Netizens suggested that either Epstein or disgraced Hollywood film producer Harvey Weinstein – convicted of rape and sexual abuse against two women in 2018 – would make equally good candidates for the ‘women’s empowerment’ talk with Harris.

Some took the event as a death knell for the ‘MeToo’ movement – which encouraged women to come forward with their experiences with sexual harassment, namely from high-powered colleagues or employers – especially given Harris’ status as the first-ever female vice president in US history.