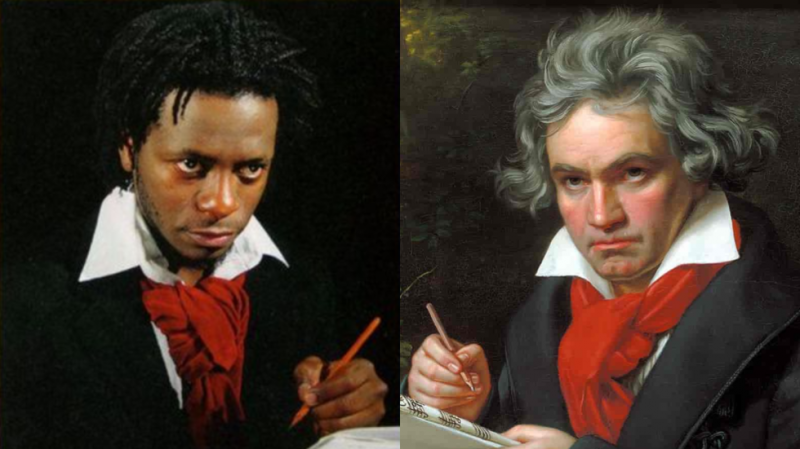 The video is part of Adkins’ ‘Black Beethoven’ series, and the transformation is supposed to reflect the artist’s “unwillingness to settle the debate on Beethoven’s race.”

Hang on a minute – there’s a debate?

Well, yes and no. Beethoven was not black. Born in Bonn, Germany, to Flemish parents in 1770, the composer was by all accounts as white as the driven snow. However, one 1814 etching of Beethoven depicts him with a dark complexion, and rumors of a Moorish ancestor fueled speculation that if he wasn’t outright black, Beethoven may have been a bit less white than previously thought.

By the time civil rights activists in the US caught wind of this, all subtlety went out the window. “Beethoven was as black as you and I,” campaigner Stokely Carmichael told a crowd in Seattle in the 1960s, “but they don’t tell us that.” Rolling Stone magazine even ran a story in 1969 declaring “Beethoven was black and proud!”

It was a rallying cry at a time when African Americans had just won their civil rights, and when racism was an ever-present force in the country. But it wasn’t grounded in reality.

Half a century later, it’s becoming a fact. Nobody in their right mind would try to claim Duke Ellington or Louis Armstrong as white, and Barack Obama is still black, despite his distant Irish roots. So why are we doing the opposite? And why now?

We canonized George Floyd this summer. As his gold-encrusted coffin toured America like the reliquary of a saint, crackers everywhere took a symbolic knee and renounced racism they didn’t know they held until the liberal commentariat told them they did. Our corporate masters pledged allegiance and dollars to Black Lives Matter (BLM), and government officials in the US temporarily suspended coronavirus lockdowns to allow marches and riots in Floyd’s honor.

But even before that, we took a look through our history books and thought, “Gee, this could really use more black people.”

Black model Jodie Turner-Smith was cast by the UK’s Channel 5 in October to play 16th-century Queen of England Anne Boleyn – a woman who was definitely white. Likewise, the BBC has cast a black Achilles, while American theatergoers have been treated to a black George Washington in ‘Hamilton’, and Brits to a black King Lear, among other posthumous recolorings.

Did you know that Queen Charlotte of England and Jackie Onassis were black? They may have looked white, but the woke crowd has decided to reinterpret the Jim Crow-era “one-drop rule” to claim them as such, and who are we to say otherwise?

After all, in 2020 black is not a color. It’s a state of mind. Just ask Shaun ‘Talcum X’ King, Rachel ‘Trans-Black’ Dolezal, or any of the BLM activists who pretended to be black to get ahead in the movement.

Who knows? Maybe if Beethoven were alive today he’d be talking up his Moorish roots and penning sonatas for George Floyd. But he’s not, so that’s entirely the stuff of imagination – just like speculation about his race. 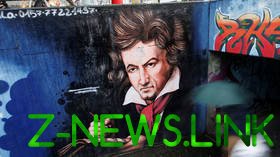 A mural of Ludwig van Beethoven is seen at a pedestrian tunnel ahead of his 250th birth anniversary in Bonn, Germany December 13, 2019 © Reuters / Leon Kuegeler