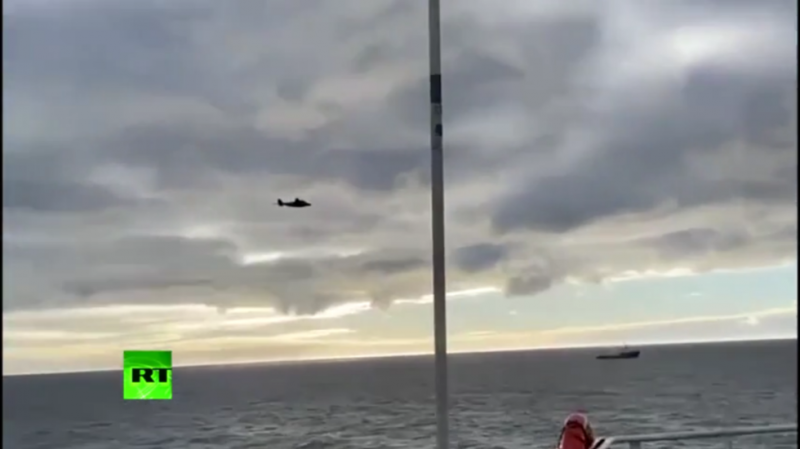 According to Moscow news agency TASS, Nord Stream 2 AG’s branch director, Andrey Minin, claimed that the last three months have seen a growth in military presence in the area.

“After the resumption of Nord Stream 2 offshore construction in January 2021, there has been an increase in activity of military ships, planes, and helicopters, as well as civilian ships of foreign countries, whose actions are often provocative in nature,” Minin said, noting that the presence of these vessels could damage the pipeline.

According to Minin, there is a 1.5-mile (2.4-km) safety zone around the site that boats not involved in the construction should not enter.

Nevertheless, foreign military ships are regularly seen nearby. He also noted that a Polish anti-submarine aircraft regularly circles the area at a low altitude.

Minin listed several incidents that occurred in the last few days, including an unidentified submarine passing just a mile away from the anchor of ‘Fortuna’, the pipe-laying ship. Recent weeks have also seen fishing vessels enter the work protection zone.

“We are talking about clearly planned and prepared provocations, both with the use of fishing vessels and warships, submarines and aircraft in order to obstruct the economic project,” he said. “This is perhaps the first and unprecedented case of its kind in history.”

Nord Stream 2 will connect Germany directly to Russia via the Baltic Sea. It aims to protect Berlin’s energy security and make it less reliant on third countries to transit gas, also lowering prices. Much of the European Union’s energy comes from Russia via Ukraine, and Kiev receives hefty fees for pipeline usage.

The project has been constantly opposed by Washington, which claims it is a threat to the energy security of Europe. In an attempt to stop its completion, the White House has imposed sanctions on companies involved in its construction. Thus far, 95% of the pipeline has been built.