War in Ukraine started 8 years ago, Russia is now ending it, Moscow claims 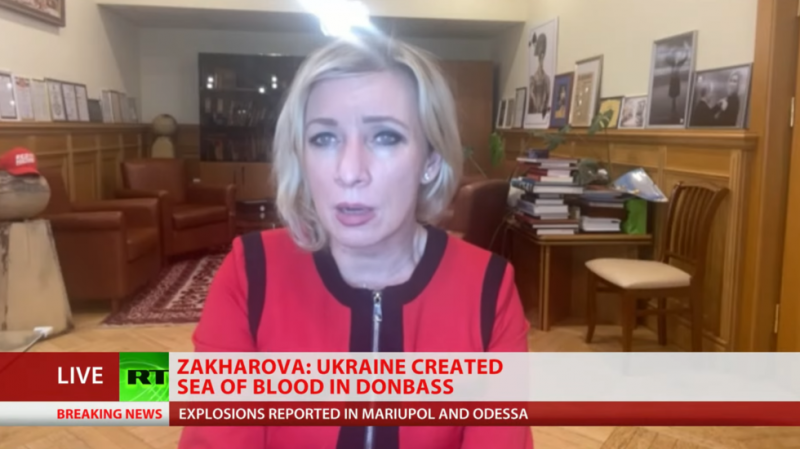 The West spent eight years ignoring the “sea of blood” in Donbass while arming Ukraine, and now claims Moscow is the aggressor when it stepped in to end the conflict, Russian Foreign Ministry spokeswoman Maria Zakharova told RT on Thursday.

Russian President Vladimir Putin announced a military operation in Ukraine in the early hours of Thursday, claiming it was necessary to “demilitarize and de-nazify” the neighbor. Kiev accused Russia of aggression, while the US, EU and NATO have called it an “unprovoked” invasion. Moscow insists this is not the case.

In announcing the operation, Putin said the “main objective is to stop the escalation of the war that’s been going on for eight years, and to stop the war,” Zakharova told RT in an exclusive interview.

“Russia did not commit aggression of any kind,” Zakharova insisted. “This did not start yesterday. There’s a sea of blood that’s appeared over the past 8 years,” she added, referring to the conflict in the Donetsk and Lugansk regions, which Russia on Monday recognized as independent states.

Donetsk and Lugansk broke away from Ukraine in 2014, after the West-backed coup ousted the democratically elected government in Kiev. Zakharova noted that the two self-proclaimed republics held a referendum eight years ago, saying they did not want to remain in Ukraine, but both Moscow and the West rejected this and tried to put the “broken” country back together.

When asked about President Volodymyr Zelensky’s statement that Ukraine wanted peace, Zakharova wondered why Ukraine was arming itself and refusing to negotiate with the Donbass.

“If Ukraine wanted peace, why did they get all these weapons” from all over the world, the Foreign Ministry spokeswoman told RT, adding, “It was clear that these were offensive weapons. Who were they fighting? Their own people in southeast Ukraine, and spoke often about seizing Crimea.” The peninsula voted to rejoin Russia in March 2014, but Ukraine and its Western backers have refused to recognize this, calling it an “annexation.”

Zakharova also noted that the top Ukrainian officials have openly and publicly brought up the idea of obtaining nuclear weapons in recent weeks, pointing out this was a fact and not something claimed by Russian intelligence.

Divisions in Ukraine go beyond Donetsk and Lugansk, Zakharova added, accusing armed groups with Nazi-era symbols – such as the notorious Azov Battalion – of having influence over much of the country.

For years, she said, Western media so concerned over human rights in places like South Sudan and Myanmar kept silent on all this, ignoring that more than 13,000 people have died in the Donbass – many of them civilians. While Russia provided them with humanitarian aid, Kiev besieged them by cutting off trade, finance, and even utilities. Zakharova noted that the water canal towards Crimea is now once again operational after Ukraine “criminally” shut it off years ago.