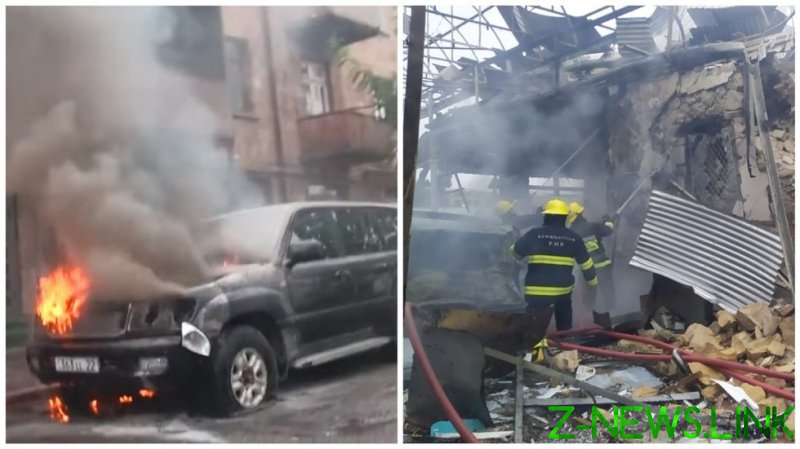 Forces of the two rivals carried out artillery and missile strikes throughout Sunday, with the intensity of the conflict showing no signs of winding down. Civilian-populated areas were hit and damaged as a result, both sides reported.

In Stepanakert, Nagorno-Karabakh’s main city of roughly 55,000 people, sirens were heard earlier in the day, followed by several explosions in the area. Power went off and residents rushed to nearby shelters.

Nagorno-Karabakh’s forces vowed a crushing response, advising Azerbaijani civilians to leave large cities housing military facilities as they will be targeted in retaliatory strikes. As the day progressed, the unrecognized region claimed that a military airfield was destroyed in Ganja, Azerbaijan’s second-largest city.

Hikmet Hajiyev, an adviser to Azerbaijan’s president, said at least four missiles hit the city, uploading a video that shows the devastating aftermath of the strikes.

Officials reported that one civilian was killed and 32 were wounded in the city. Baku accused Armenia of launching the attack from inside its territory – thereby expanding the war zone, Azerbaijan’s defense minister stated.

“Azerbaijan will destroy military targets both inside Armenia and on occupied territories, from which shelling of our populated areas is taking place,” Hajiyev told journalists. Yerevan has denied allegations that it opened fire from its territory.

Intense hostilities have been raging between Armenian and Azerbaijani forces for a week, marking one of the worst escalations of the decades-long dispute over Nagorno-Karabakh, a large Armenian-populated enclave within Azerbaijan. Fighting broke out on September 27, when Baku and Yerevan accused each other of cross-border aggression. Both sides introduced martial law and conscription calls, deploying heavy weaponry to the frontline.

This week, the leaders of France, Russia, and the US – members of the mediating OSCE Minsk Group – called for an “immediate cessation of hostilities between the relevant military forces.”