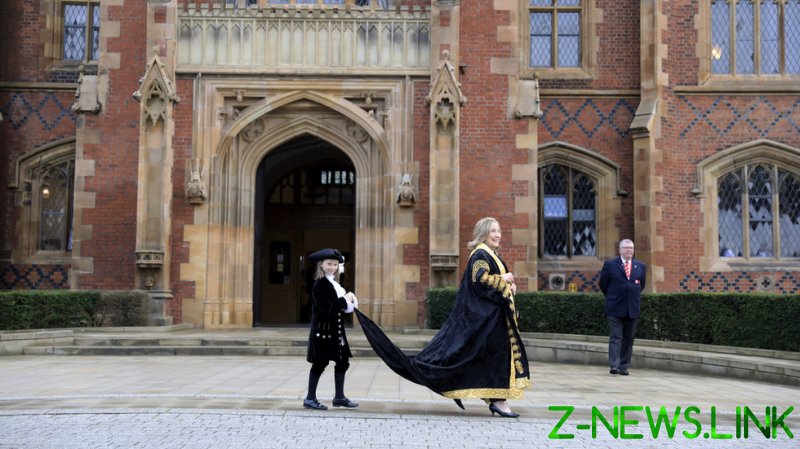 Clinton was inaugurated on Friday as the first-ever female chancellor of Queen’s, a public university dating back to the 1840s. She was actually appointed to the five-year term in 2020, but her installation was delayed on account of the Covid-19 pandemic.

Cries of “Shame on Queen’s! Shame on you!” and “War criminal! Out! Out! Out!” could be heard from protesters outside the university’s gates as Clinton made her way into the building, a little girl following behind carrying her cape.

“We are delighted that Secretary Clinton has been able to travel to Belfast to be formally installed as the University’s 11th chancellor,” said Ian Greer, the president and vice-chancellor who actually runs Queen’s on a daily basis. He called Clinton “an internationally recognised public servant who has demonstrated a longstanding commitment to Northern Ireland.”

To protesters outside, however, Clinton was a “war criminal” responsible for the destruction of Libya in 2011, when she led the State Department during the first Obama administration.

After the US-led “regime change” intervention, the once-prosperous North African nation collapsed into a decade-long conflict between regional warlords. It was reported at one point that migrants from sub-Saharan Africa were being trafficked at open-air slave markets.