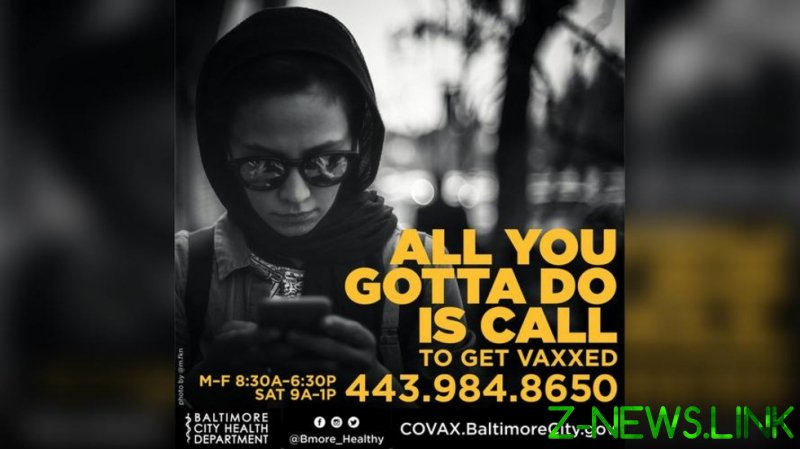 “Mimosas with the girls this weekend? It’s a bad idea if you haven’t been vaxxed,” says one of the recent ads posted by the city’s health department, featuring a pouting woman being lectured by a male partner.

Going for equal-opportunity nagging, another Baltimore ad featured a woman lecturing a man about how he can’t go socialize with friends without getting the jab.

Other ads appealed to the city’s African-American residents, as well as Spanish-speakers – who were told “no papers, no problem.”

More than a few Baltimoreans recognized the ominous tropes from the much-panned UK ads, which seemed designed to instill fear rather than impart knowledge.

Meanwhile, the city “has taken a proactive approach, partnering with hospitals and pharmacies to create mobile vaccine teams to vaccinate those most at risk of severe Covid-19,” ProPublica reported on Saturday.

The Baltimore City Health Department even played fast and loose with separation of church and state, collaborating with Johns Hopkins University and area bishops to suggest what behaviors were permitted inside houses of worship.

On Monday, the state of Maryland started offering its employees a $100 payment to encourage vaccination. Governor Larry Hogan announced that the government was “further encouraging state employees to get vaccinated to help keep themselves, their families, and their communities healthy and safe.”

The program is projected to cost $5 million and will require participants to show certificates of vaccination to state government employees at the Human Resources Office – meaning one can’t simply look like a state employee, one must actually be one.

As of May 1, about 2.75 million Marylanders – about 46% of the state’s total population – have received at least one dose of a Covid-19 vaccine, while 2.09 million, or 35%, were considered fully vaccinated.

Baltimore’s ad campaign also pointed out that those not vaccinated “should still be wearing a mask,” but that messaging has been undercut by none other than President Joe Biden, who has persisted in masking up even outdoors and after being fully vaccinated – and after his own CDC had told Americans there was no need to do that.

The US state of Colorado has tried a different approach, telling its residents they can be exempt from the indoor mask mandate – extended until June – if at least 80% of people gathering inside are fully vaccinated and can prove it.