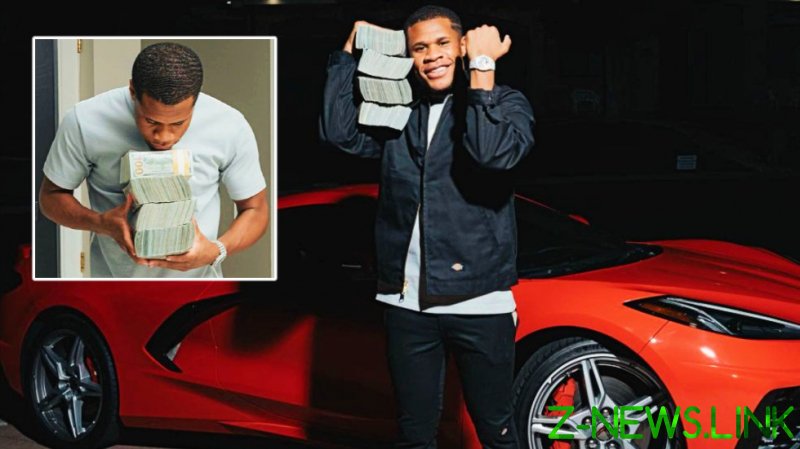 In a cash-crazed scene reminiscent of boxing great Floyd Mayweather’s tendency to picture himself surrounded by money, WBC lightweight champion Haney, who once caused controversy by claiming he would “never lose to a white boy in my life”, started the clip with his shirt off inside a house.

The film then cut to stylized, glossy shots of 22-year-old Haney showing off various possessions including a luxury car and watch, trainers and what appeared to be a gun before cutting back to him falling backwards onto a couch strewn with the falling money.

The self-obsessive sequence was set to the rap song ‘Having our Way’ by Juicy MF Juice, Migos and Drake, which includes lyrics about being an “assassin” and “snipin’ the b*tch”, makes references to “lil n****s maggots” and boasts about how the protagonist “piped the b*tch up for some action”.

Linares was 35 and had lost two of his previous five fights when Haney beat the Venezuelan in his most recent fight, in May, and Gamboa was 38 and coming off a defeat when Haney defeated him in November.

All five of the senior regional and international titles Haney has won have been vacant, and ‘The Dream’ has scored one knockout victory in eight fights since November 2017.

Haney’s 26-fight unbeaten record, though, is impressive – and his posturing divided fans.

“They want to be Money May without being Pretty Boy Floyd,” observed one, while another suggested: “The boy wants to be Floyd so bad. It’s pretty sad, actually.”

A critic responded: “The whole money thing has played out – we’ve seen it. No-one cares for it anymore, it’s the reason everyone’s switched to the UFC. People just want to see the best fighting the best.”

Another asked: “This whole super rich theme is so played out. Can’t anybody be themselves anymore?”

Apologists for Haney pointed out that his Instagram post may have been aimed at and viewed more favorably by his own generation. “Oh pipe down, clown,” fired back one. “Let the young man enjoy himself.”

“It’s not for you or me – I’m 46,” added another. “He’s trying to appeal to his age and demographic, just like Floyd did and most older guys, including his promoter, didn’t understand at the time.”

A viewer in agreement nodded to the colossal count of almost 62,000 likes the clip amassed during a day. “Just look at all the young people who are liking the post,” they said. “Do you think he is doing that for older people’s approval?”