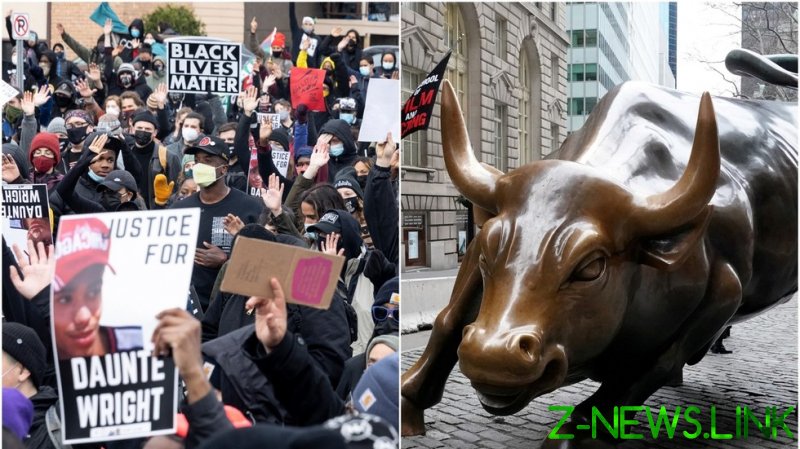 After another round of property destruction as Black Lives Matter protested over a police officer killing Daunte Wright ‒ and another round of trillion-dollar political giveaways by the Biden administration ‒ many are wondering aloud about the real looters in the US.

Many privileged Americans believed they were undergoing a racial awakening thanks to violence from both sides during last summer’s explosion of protests and riots in hundreds of cities across the nation. Some merely feared Covid-19, others the warlike atmosphere of their particular city, but most were ultimately forced to take shelter inside with a copy of the odious self-hating New York Times best-seller “White Fragility” or another self-flagellating race-consciousness tome.

Fearing the outside world let them pretend it was a conscious choice and that they weren’t literally under siege by “mostly peaceful” types of all races wreaking havoc in the streets. They got to play the guilty party, and the angry young people outside breaking glass got to ascribe a method to their madness, having successfully vanquished the bourgeoisie for another day. The angst-ridden children of the wealthy were even able to LARP at ‘uplifting the working class’ What’s not to like?

What’s really going on is just another kind of looting ‒ a psychological variant that involves victimizing all races in a way the sociopaths who designed the Jim Crow era never would have dreamed of. Didn’t win that track race? Must be white supremacy. Get a poor grade on your test because you didn’t study? They expected too much from you because you were Asian and they’re super great at math. That guy doesn’t want to go out with you even though you asked him twice? Why, he’s a white supremacist too, the creep ‒ keeping in mind one need no longer be actually white in order to be thus smeared. One can easily see where this slippery slope goes, and it’s not something anyone needs at a time when the country is already poised to explode.

Some scholars truly believe that removing not just America’s centuries-old history but purging US history of all racial memories is the only way to reach true peace. We have seen this in recent months with calls to remove statues not only of Confederate leaders but of George Washington and Thomas Jefferson, as well as other ‘Founding Fathers’ (perhaps one should say ‘Founding Parents’ now?). Only in ditching the contributions can the country come to terms with the crimes committed by their ancestors against their neighbors’ own ancestors. Only this (and a guilt-based curriculum furnished by the New York Times’ “1619 Project”) will save the children from becoming a whole new generation we have to brainwash ‒er, educate- against racism. It’s child’s play to merely insert the correct genetic history into your past, and since the children have already been programmed to feel guilty since starting school (a date most major cities leave earlier and earlier, with New York City’s kids shuffled onto the school bus at 2), who cares about a little fib here and there?

Won’t you be happy when your child is doing this for a living? © Giphy (scene from Metropolis)

The diversity frenzy couldn’t have come at a better time, financially speaking. With money totally divorced from its value and trillions being fed to the marketplace every few months seemingly just for the lulz, what could be better than heaving even more guilt onto young children who haven’t even formed their own identities yet? Diversity counselors are a dime a dozen in this recession, and many wealthy parents won’t even think of enrolling little Suzie in a school without a unit of sensitivity training. Religion has long since defected its once-central place in American lives; why not replace the hole left for Original Sin with atoning for one’s microaggressions?

This type of psychological looting far outweighs even many of the crowds of angry young people showing up to break windows, steal sneakers, and throw TVs in the back of their cars as they realize police are no longer doing their job. And even if they are caught, it’s wildly unlikely they’ll be prosecuted in most “blue” American cities.

This is the problem central to many of the “looting” and “reparations” narratives Americans are being treated to in a social-justice floorshow time after time, this idea that the real problems with racial equality stems from not having enough black members of the industries most deeply involved in maintaining that same racial inequality.

The US has been fighting a “War on Poverty” since Lyndon Johnson swept into power on the back of three real reformers’ corpses ‒ Martin Luther King, Jr., JFK, and Malcolm X. Ever the scammer, Johnson looked at a very real problem no political administration would be able to solve in just one term, and milked it for all it was worth. That problem is still being milked today, and an entire industry has been born of welfare counselors, paperwork sifters, and other bureaucratic nightmares. Try to clean these essentially useless hangers-on out of their government posts and they will resist with all their might, having forgotten, many of them, that their job is to raise other Americans out of poverty ‒ not having created the ultimate self-licking ice-cream cone. Such perpetual motion of supposed job-creation without having accomplished their supposed goals. Just as the “War on Drugs” was supposed to keep kids from experimenting with substances (only for a truly massive opioid epidemic to take hold and kill more Americans than the Vietnam war while also shredding the lives of their families and communities) ‒ and the War on Cancer, which sent medical costs through the roof without actually, you know, curing cancer, poverty has only increased as real wages go down and the average wage stays the same.

If you truly want all Americans to start out life with the same opportunities as the wealthy ‒ a noble cause and one we should all be working for ‒ stop pretending to know what’s better for them, breathing down their necks and demanding they enter the career path you believe they need. There’s an extremely parasitic industry coming into play that actually treats young children as investments to be securitized and sold just like student loans were, and like mortgages were before that (and we know how that turned out).

A media-driven interest in making reparations to the descendants of slaves is sweeping the US, all but demanding white Americans sit down, shut up, and open their wallets. Store owners are justifiably upset, especially after they see the same person at the scene of the ‘crime,’ perhaps even wearing those nice sneakers they stole last time they hit the Nike store to remind them they’re above the law.

But looting comes in more ways than one, and until all Americans wake up to that fact, this chasm between the rich and poor ‒ already swollen to unnatural size thanks to the pandemic ‒ will only widen. Trillions of dollars have already been stolen from the American people over the last year as the Federal Reserve set its print speed to Mach 5 and started blanketing the office with near-worthless green paper. What happens when it all hits the fan? Some might blame “looters,” and certainly at a granular level thieves who break into shops, steal whatever they can carry, and disappear never to be seen again would fall under that category.

With the summer’s Black Lives Matter protests (shockingly!) not having accomplished enough by way of redistribution of wealth, some wealthy individuals have taken to justifying looting as ‘reparations by another name.’

Besides making it clear they live in a fortress and are thus terrified of the black lives they claim matter, this cash-grab is business as usual, according to activists who live in the cities where BLM sweeps through like locusts. The intention ‒ get each ‘side’ tearing out the other’s throat and move on to the next group considered a challenge. Asset-stripping, buy low, sell high.

And speaking of real estate, the BLM co-founder Patrisse Khan-Cullors has apparently developed an addiction for it. Her family has not one, not two, but four large homes ‒ just the sort of thing you’d need if the violent social movement you’d ginned up with the help of some very rich and very cynical private equity execs who’ve fanned the flames of divide-and-conquer mercilessly for a year now went south and set the suburbs on fire. From an “RV repair shop” shed to a small landing strip for planes (!), it’s clear Khan-Cullors is going to be sitting pretty if ‒ or when ‒ the revolution comes. When the cat’s away, the revolutionaries will slay, as the saying, updated for 2021, goes.

The only questions that remain, then, are who will be duped into believing any words that come out of the mouth of this insanely rich “trained Marxist” or her colleagues ‒ who will know a looter when they see one? It’s pure laziness to assume when you’ve got two men in a room, one with a stack of golf clubs at his feet and the other wearing his spotless new Nike tracksuit, no one will wonder ‒ or care ‒ at the signals they are broadcasting to fellow looters as they sip their Scotch on national TV. Appearances are everything. There’s not so much difference between the Black Lives Matter leadership, who promise the moon to the disadvantaged and deliver them crumbs (when they deliver anything at all) and exploit their family tragedies ‒ or American politicians, who insist they’ll change our national pigsty into a palace only to continue their predecessors’ mission of stripping the meat from Uncle Sam’ bones.

But what isn’t said is just as, if not more, important. Millions of dollars have been poured directly into Black Lives Matter in the past year, and now that it has an official nonprofit status, that number is likely to soar past the billions mark. The funds come from very wealthy companies that seem to be trying to cover up either their exploitation of the movement or just wrapping themselves in virtue-signal Kevlar should things go bad. The wealthy aren’t stupid ‒ they’ve been buying up bunkers in New Zealand and driving the price of RVs so high one needs binoculars to see it.

Ultimately, if reparations work ‒ or UBI, or any of the other trendy programs being served up to cure (or rather tranquilize) poverty or race/ethnic-based repression ‒ those who’ve made their lives on tearfully bloviating on how to solve the problems of the poor will be out on the street without even the luxury of the cardboard boxes once inhabited by their clients (the world has become prosperous, after all!). No one wants to work themselves out of a job.

The only ones getting screwed in this deal are the American people. It’s not like this hasn’t happened before ‒ we must start to ask if we secretly enjoy it, because this is not normal.