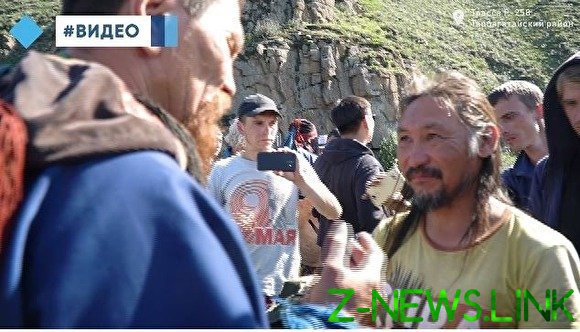 A self-proclaimed shaman Alexander Gabyshev from Yakutia, which is walking with a protest March in Moscow in Buryatia, on the border of Ulan-Ude, was stopped by the shamans of the community “Tengeri”, which became known to sacrifice five camels “on the strengthening of Russia and its peoples.”

A video of the meeting published on the newspaper’s website “Arigus”. “We wanted to explain to this man that you’re not a shaman. Once you break the precepts, you break the principles of religion, so you’re not a shaman,” said the Supreme shaman center “Tengeri” Bair Tsyrendorzhiyev. In response Gabyshev said that he is still a shaman-warrior, however, he decided not to go to Ulan-Ude.

In the way back to Moscow from Yakutsk Gabyshev went 6 March this year. Capital it hopes to achieve in the late 2020 — early 2021. Gabyshev is on the side of the highways and pulling an aluminum cart needed in the way of things — first of all, this Yurt is that it sets for the night. In the way to Gabishevo joined a few people. One of them, according to “Arigus”, nine convictions.

Community “Tengeri” became known after the beginning of February on YouTube appeared a video of the mass ceremony, “Jean Tengeri Yabba” with the sacrifice of five camels “on the strengthening of Russia and its peoples.” Animals killed, and meat boiled in cauldrons and served to the spirits on the camp fire place. Upon animal sacrifice, the Prosecutor of Angarsk, Irkutsk region carried out an inspection. Then the Supervisory authority reported that the police decided not to initiate criminal proceedings. However, the Rosselkhoznadzor has fined the organizers of the shaman’s ritual.