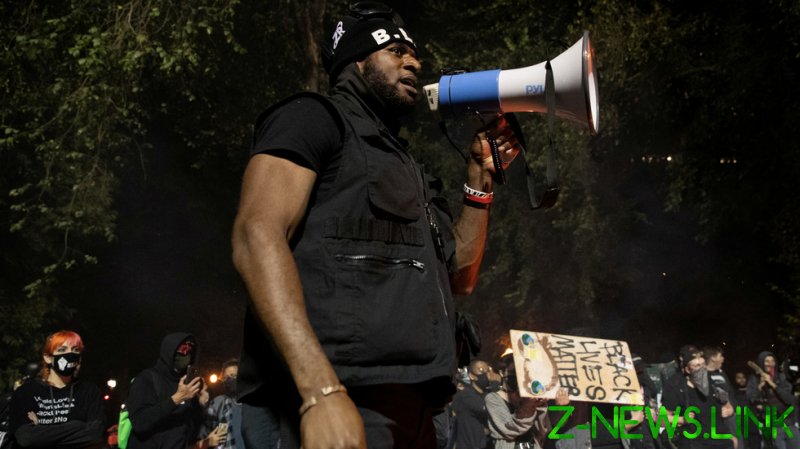 “Wake up. Wake up. Wake up, motherf****r, wake up,” BLM protesters chanted Thursday night as they went through residential areas and blocked off streets. Their sound was amplified by bullhorns and beating drums.

Such tactics may be spreading around the country. BLM demonstrators in Seattle last week went into a residential area and demanded that white people move out of the neighborhood and give their property to blacks.

More of the same may be planned for Friday in Portland. A message posted earlier today on Twitter by a BLM supporter urged activists to gather for a “direct action march” this evening, starting in Irving Park. The park is located north of Portland’s downtown, in a residential area.

READ MORE: ‘All I did was fight him’: Portland police arrest BLM activist who FLY-KICKED defenseless man who was dragged from truck

The message, posted under the account name Riot Ribs, noted that Irving Park was the rallying point for the Albina riots in the summer of 1967, when protesters set fires, broke windows and looted a nearby store. “Black activists often chanted, ‘burn the town down’ as they would march and take direct action through one of Portland’s most racist neighborhoods,” Riot Ribs said. “Show up tonight, y’all!” The message was later deleted. 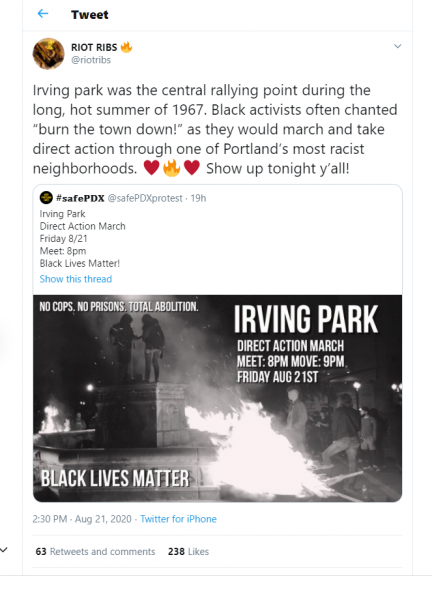 Twitter users took the message as a call to terroristic action. “Not sure you should be encouraging terrorism acts, encouraging discourse referring to the threat of burning down neighborhoods,” one netizen tweeted.

Other users suggested that screaming at people in their homes may not be the wisest tactic for building popular support for BLM’s goals. “Ah yes, this is the perfect way to get people to join my cause – scream in the street in the middle of the night when people are sleeping and probably have work the next day,” one user said. “You’ve definitely got my vote.” 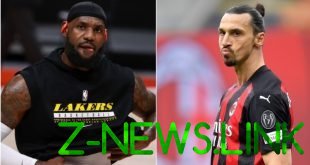 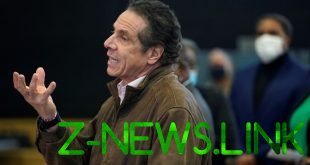