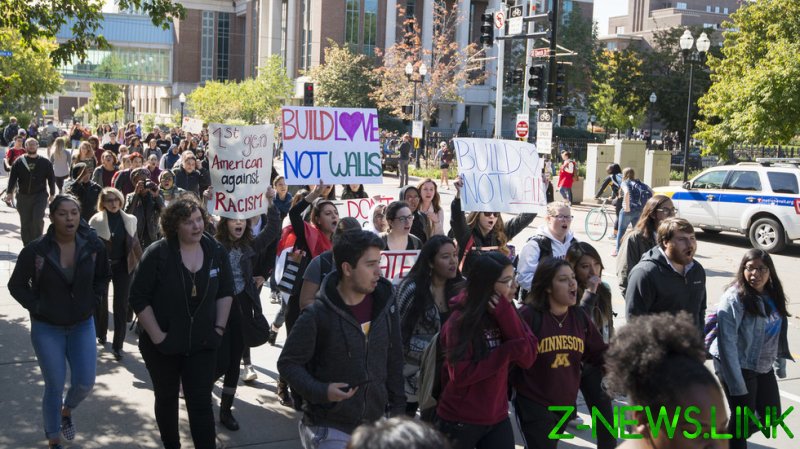 It works hard to promote to a pre-college audience the kind of woke leftism popular in universities, but, according to Siddique, the idea of the woke university is a complete myth.

He argues that because professors have less secure contracts than they used to, and because university boards – who make hiring decisions, control budgets, and dictate labor policy – are often staffed by members from corporate backgrounds, their pro-capital attitudes trickle down, making universities as a whole right-wing institutions.

All of that would be true, if these corporate capitalists were the top-hat wearing, mustache-twirling robber barons of old, laughing as they forced children into the mines. But they’re not, and Siddique is deceptively using an old-fashioned conception of the right-left divide to cover up the very real influence of the modern left on campus.

The American university is left-wing to its core. Liberals and leftists outnumber their conservative colleagues in some universities by a factor of 72 to just above zero. In UMass Amherst, where Siddique lectures, there are 34 liberals for every conservative. Across the country, academics have been canceled for questioning the woke orthodoxy. Question the Black Lives Matter movement, argue against affirmative action, attempt to debate transgender zealots, and you’ll be fired. From the proliferation of Critical Race Theory to the erasure of “problematic” white history, to the cleansing of Western thought from the curriculum, the petty Pol Pots of these institutions have two feet on the gas on the way to Year Zero.

Even the hard sciences aren’t immune to this cancerous ideology. “There is no ‘Democrat’ way to teach calculus,” Siddique writes. However, the Mathematical Association of America disagrees, and declared last year that mathematicians need to be conscious of the effects of “race and racism” on their work. Essentially, 2+2 = 4 can be considered racist, just like everything else seemingly can.

As for the capitalists in charge, Siddique may be correct in attacking their efforts to give professors shorter contracts and charge students higher fees. But, as stated above, these aren’t the robber-barons of old; they’re representatives of ‘woke capital,’ and march in lockstep with the left-liberal professors and students below them.

Ohio’s Oberlin College, a bastion of liberalism, has former Apple vice president Cynthia Hogan on its board. This is not an ideological contradiction. Apple sings from the same hymn sheet as the professors, and last year pledged $100 million to a “holistic … and company-wide” effort to “dismantle systemic racism.” The harsh conditions Apple’s products are made in abroad, however, weren’t targeted for improvement.

Harvard’s ‘Board of Overseers’ includes names from Goldman Sachs and Google. Both of these companies have shelled out cash to woke causes, and Google, in particular, through its political meddling and overt censorship of conservative content, is as far from right-wing as one could imagine.

And therein lies one of the inherent contradictions of the modern left-right divide. Yes, these universities push the same leftist views as their corporate bosses. But they do this because it’s a form of leftism that presents absolutely no threat to their continued accumulation of profit. If Black Lives Matter were focused on dismantling the corporate oligarchy instead of the mythical specter of “systemic racism,” the oligarchs in charge wouldn’t be handing out billions of dollars to the organization.

Occupy Wall Street focused its rage on this oligarchy, and was infiltrated and broken up in short order. Soon after the Occupy movement dissipated, the establishment media amped up its focus on racism, with the Washington Post mentioning “racism” six times more frequently in 2020 than it did in 2010. But whereas the FBI designated Occupy Wall Street a “terrorist threat,” it literally bent the knee to Black Lives Matter, despite the wave of arson and crime that accompanied its protests last year. And while some of America’s largest corporations sicced their private security on OWS, they opened their wallets to BLM.

Put simply, woke grievances can be monetized, and economic ones can’t.

Siddique, on some level, grasps this. He wants faculty members to strike for better contracts, and progressives to “relentlessly push” for free education and the cancelation of student debt. But for any of that to happen, he needs to realize that the version of leftism pushed in tandem by universities and corporations is a threat to reform from any side of the political spectrum.

As long as woke leftism isn’t named and condemned, it will remain allied with capital in crushing rightist dissent and handing feel-good social victories to the left, while professors such as Siddique, afraid to criticize anything left of center, will continue to rage against the capitalist elite playing them for suckers.

Then again, perhaps it’s a bit of a stretch to expect such an argument from Teen Vogue. After all, there are articles to be written about the “revolutionary” power of being obese, and how the pages of the Quran “validate the queer experience.”