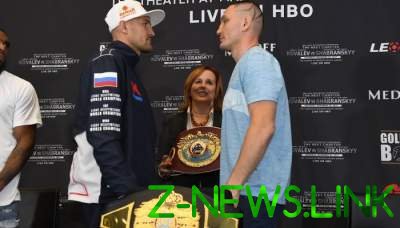 Ukrainian Vyacheslav Shabran in new York at the legendary arena, “Madison Square Garden” in a bout with Sergey Kovalev will compete for the vacant WBO title at light heavyweight.

At the time of official confirmation of the fight Shabran-Kovalev was not yet known that the match will be the title. The best heavyweight of our time Andre ward has announced his retirement and left the belt vacant. The promoters then went ahead and knocked to the beat of Shabran-Kovalev the WBO title.

Two defeats Kovaleva from ward’s do not Shabran favorite fight, and the Ukrainian he understands it. Bookmakers practically do not doubt in the victory Kovalev, suggesting that the former champion in the second half of the fight knocks out the opponent.

Record native of Zhytomyr is not kind to big names in December 2015 Shabran split decision was held in the famous battle with Alexander Stud Yunieski Gonzalez, and a year ago KOs lost to Sullivan Barrera, which last year was worthy of fighting Andre ward.

Shabran before the fight with Kovalev passed the best camp in his career. To cover the chance of a native of Zhitomir were prepared from two world Champions – title holder of WBA Featherweight champion Dmitriy Bivol and WBC champion in the second Middleweight David benavidez.

Kovalev defeats by ward decided to radically change your training process and began working with Abror by Tursumuratov. Did the Russian rebooting good, learn very soon.

Battle Shabran-Kovalev on the territory of Ukraine will not be shown. Live the title fight will show the Russian “First channel”. Beginning
broadcast – November 26 at 06:00 on the Kiev time.