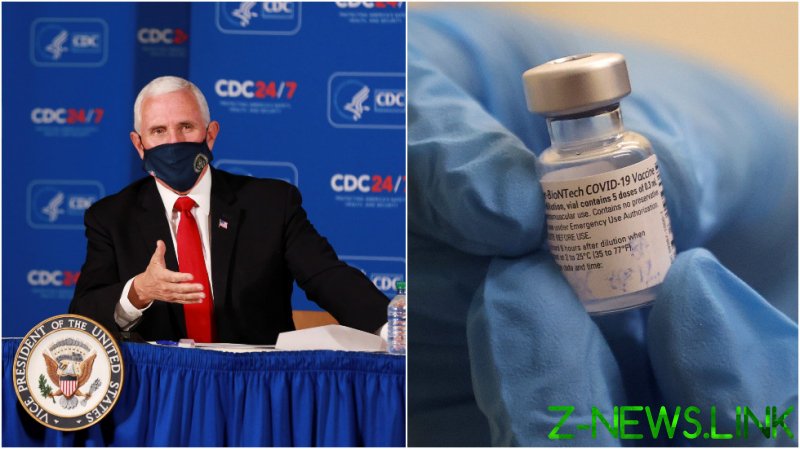 Though he did not specify a date, Pence suggested he would soon receive the inoculation at a roundtable event on the federal vaccine initiative, Operation Warp Speed, in Bloomington, Indiana on Tuesday.

“Be confident that we have cut red tape, but we’ve cut no corners when it comes to the development of this vaccine,” the VP said. “I look forward in the days ahead to receiving the vaccine myself and do so without hesitation.”

While an official with Pence’s office told the Hill that discussions were still ongoing about exactly when he would take the vaccine and how that could be leveraged to “build public confidence” in the inoculation, CNN reported it could come as soon as Friday, citing two “sources familiar with the plan.” They added that he could receive the jab on camera.

With the FDA’s fast-tracked authorization granted last week to a vaccine developed by Pfizer and BioNTech, Pence said the country has arrived at “the beginning of the end of the coronavirus pandemic,” noting that nearly 3 million doses of the immunization would be distributed around the US by the end of the week.

A vaccine developed by Moderna could soon follow, Pence said, with some 20 million doses ready for shipment following FDA approval. The regulator is expected to give the green light to Moderna sometime in the next week, issuing a guidance on Tuesday recommending the move. However, the FDA also noted that there were four reported cases of Bell’s palsy, a condition affecting control of the facial muscles, among trial participants, but concluded there was insufficient evidence to link the symptoms to the vaccine. Pfizer’s trial similarly found four cases of Bell’s palsy among its 43,000 participants.

In a tweet last week, President Donald Trump suggested that White House staff would not receive the jab until “somewhat later in the program, unless specifically necessary,” cutting against reports that staffers would be among the first to be vaccinated. It is unclear whether Pence would be an exception to that policy, however, given his place in the presidential line of succession.

Trump also said that he personally is “not scheduled to take the vaccine,” with White House press secretary Kayleigh McEnany explaining on Tuesday that while he is “open” to the idea, “he did recently recover from Covid” and “has the continued protective effects of the monoclonal antibody cocktail” he was given after contracting the illness earlier this year.